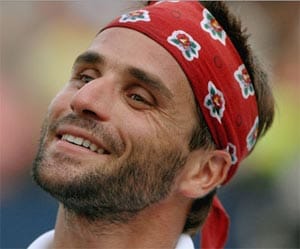 "Unanimously, the federal bureau accepted the proposal of the DTN (National Technical Director) that Arnaud Clement become captain. It's a consensus choice, all the players have been contacted," said FFT president Jean Gachassin.

Clement, a runner-up to Andre Agassi at the 2001 Australian Open, replaces Guy Forget, who left the post in April after 14 seasons in charge.

Clement participated in his final singles match on Monday -- a defeat to compatriot Kenny De Schepper in the first round of Wimbledon qualifiers -- but is expected to enter next week's doubles competition at the All England Club with Michael Llodra.

France have won the Davis Cup on nine occasions, with the last triumph coming in 2001.

Comments
Topics mentioned in this article
Tennis Arnaud Clement Kenny De Schepper Marin Cilic Lukasz Kubot Jeremy Chardy Aravane Rezai Michael Llodra
Get the latest updates on IPL 2021, check out the IPL 2021 Schedule and Indian Premier League Live Score . Like us on Facebook or follow us on Twitter for more sports updates. You can also download the NDTV Cricket app for Android or iOS.