Adrian Ungur pulled one back for Romania defeating Juan Monaco 6-4, 2-6, 6-3 but by then Argentina had already taken an unassailable 4-0 lead and progressed to the next round of the Davis Cup. 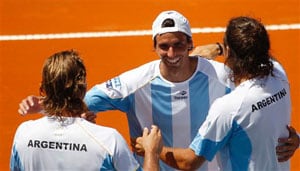 Adrian Ungur pulled one back for Romania defeating Juan Monaco 6-4, 2-6, 6-3 on Sunday but by then Argentina had already taken an unassailable 4-0 lead and progressed to the next round of the Davis Cup.

In the first reverse single, Eduardo Schwank defeated Victor Crivoi 7-6 (3), 6-2 to give Argentina a 4-0 lead over Romania in a Davis Cup first-round match, which Argentina clinched by winning the doubles the day before.

The Davis Cup victory was costly for Argentina's David Nalbandian, who won the first singles match on Friday against Ungur. Argentine team officials said Sunday that Nalbandian will need three to four weeks rest for a left leg injury picked up in the match. He also aggravated a groin strain.

Argentina, which has been a three-time finalist without ever winning the Davis Cup, secured the victory on Saturday when Juan Ignacio Chela and Schwank beat Victor Hanescu and Horia Tecau 6-2, 7-6 (8), 6-1.

Argentina will face either Kazakhstan in the quarterfinals at Parque Roca, an outdoor clay-court complex on the south side of the Argentine capital.

Comments
Topics mentioned in this article
Tennis Argentina David Nalbandian Eduardo Schwank Croatia Romania Victor Crivoi
Get the latest updates on ICC T20 Worldcup 2022 and CWG 2022 check out the Schedule, Live Score and Medals Tally. Like us on Facebook or follow us on Twitter for more sports updates. You can also download the NDTV Cricket app for Android or iOS.