Andy Roddick ground out a straight-set victory over James Blake on Monday night in the second round of the Winston-Salem Open. 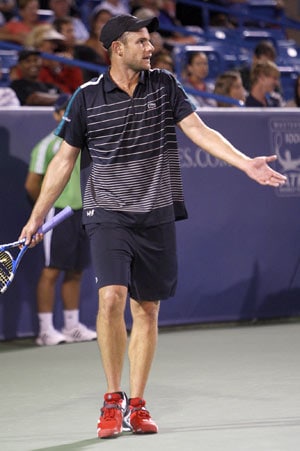 Andy Roddick ground out a straight-set victory over James Blake on Monday night in the second round of the Winston-Salem Open.

In other second-round matches, Belgium's David Goffin upset 10th-seeded Viktor Troicki of Serbia 3-6, 6-4, 7-5, while the match between seventh-seeded Sam Querrey and Colombia's Santiago Giraldo was suspended by rain. It will be resumed Tuesday, with Querrey having won the first set 6-3.

"I've rarely been unhappy walking off the court with any win," said Roddick, a former world No. 1 and U.S. Open champion who has battled injuries the past two years.

"I was fortunate to get through the first set, because (Blake) came out of the gates pretty hot. The second set I played well. I've been lucky a lot in my career. I'm good at winning those type of matches where it doesn't look that great all the time."

Roddick had 11 aces, but had to overcome an early break to force a tiebreaker in the first set. He then got a break in the second set to force another tiebreaker and improve to 9-3 against Blake.

Roddick, Querrey and Troicki were the only top seeds in action on Monday, with the rest opening play on Tuesday.

Among them will be third-seeded John Isner, the tournament's defending champion; top-seeded Jo-Wilfried Tsonga of France, No. 2 seed Tomas Berdych of the Czech Republic and fourth-seeded Alexandr Dolgopolov of the Ukraine.

Comments
Topics mentioned in this article
Tennis James Blake Andy Roddick
Get the latest Cricket news, check out the India cricket schedule, Cricket live score . Like us on Facebook or follow us on Twitter for more sports updates. You can also download the NDTV Cricket app for Android or iOS.