Murray lost 3-6, 6-4, 6-2 to Florian Mayer, the world number 40 from Germany, who seemed more surprised than anyone at how the contest turned around. 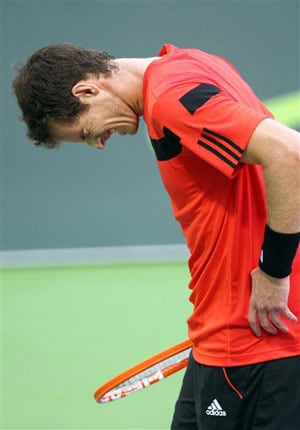 Wimbledon champion Andy Murray warned of "bumps along the road" during his comeback from injury and his words proved prophetic as he began the new year with a stunning second-round loss in the Qatar Open.

Murray led by a set and 3-0 and yet lost 3-6, 6-4, 6-2 to Florian Mayer, the world number 40 from Germany, who seemed more surprised than anyone at how the contest turned around.

It was only Murray's second match on the tour after a back operation and a four-month absence, but for about an hour his lack of match practice had hardly seemed a problem as he took charge.

Then Mayer attacked more, Murray tired, and everything changed.

"It was amazing," said Mayer. "To be honest in my mind the match was finished. I don't know how I came back. I played fantastic tennis. In the third set maybe he was injured, but I played well."

Murray however admitted to no injuries during the one hour 51-minute encounter, and whatever his physical discomfort it did not prevent him playing doubles later in the day.

"I am stiff and sore but that's to be expected," he claimed. "It's more the joints rather than muscles. I have to get used to changing direction and playing at this level.

"I didn't have high expectations because I have not had many matches. I was playing well and moving well at the beginning."

It was nevertheless "a good day", Murray concluded. "I lost two matches but got through without any niggles or injuries."

Mayer, a former top 20 player, slowly imposed himself on the match as Murray became more defensive, and after letting slip two break points for a 4-2 second-set lead, the Scot hurled down his racket and flung away his sweat bands.

He then served a double fault and dropped serve at the start of the third set and was never close to breaking Mayer after that.

"It's normal - you can't be a hundred percent, you have to play some matches," the German graciously said. "I am sure he will improve round by round in Melbourne."

However, the loss of court time in preparation for the Australian Open, which starts in little more than two weeks, may prove to be the most significant aspect of the setback for Murray.

There were early season uncertainties elsewhere too, as David Ferrer, the second-seeded Spaniard, his compatriot Fernando Verdasco, the eighth seed, and Philipp Kohlschreiber, the sixth-seeded German, all lost.

That trio were beaten by Daniel Brands of Germany, Victor Hanescu of Romania and Peter Gojowczyk of Germany respectively.

A day of considerable German success continued when Dustin Brown, a qualifier, saved four match points in a 28-point second set tie-breaker to win 3-6, 7-6 (15-13), 6-4 against Ivo Karlovic, the Croatian who had ousted fourth seed Tomas Berdych a day earlier.

For a while it seemed the biggest upset of all was possible, with world number one Rafael Nadal taken to three sets against another German in Tobias Kamke.

"He took risks and played very well," said Nadal. "But I had a lot of chances with my return and hope to make a few more tomorrow (Thursday).

"I don't know if I can win the tournament. Yesterday (against Lukas Rosol) was tough, today was tough, and it is difficult to think about winning titles when you are in the quarter-finals. But I am very happy to be there."

Nadal, who has never won this title in five attempts, next faces Ernests Gulbis, the seventh-seeded Latvian.

They are the only seeds remaining after fifth seed Richard Gasquet, struggling with a back strain, lost 6-2, 7-5 to his French compatriot Gael Monfils, a former finalist in Doha, in Wednesday's last match.