A bagpiper welcomed Andy Murray into the church, dressed in a blue and green tartan kilt, while Kim Sears arrived in a car a few minutes later, to a peel of applause from the gathered crowds. 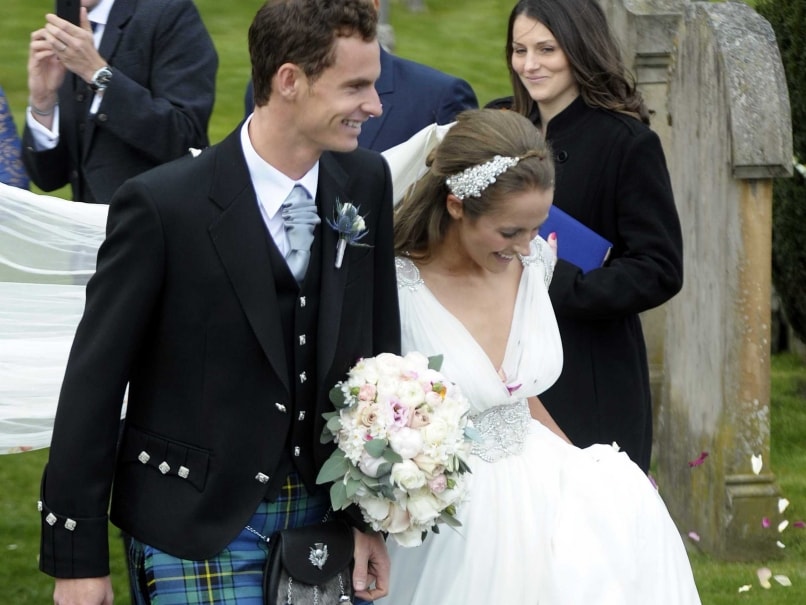 A bagpiper welcomed the 2013 Wimbledon champion into the church, dressed in a blue and green tartan kilt, while his bride-to-be arrived in a car a few minutes later, to a peel of applause from the gathered crowds.

Murray earlier posted a series of "emojis" to his 2.98 million Twitter followers, revealing his plans for the day. They ended with cocktails, kisses and several Zzzz sleep symbols.

Despite earlier hailstorms, the sun shone on family and friends as they arrived for the intimate service in Dunblane Cathedral, which was decorated with huge bouquets of white hydrangeas and full-sized blossom trees.

With an eye on the skies, Murray's mother Judy tweeted: "Hailstones. Marvellous" and then later "Snowing. #whitewedding".

Murray revealed that his brother Jamie and friends Ross Hutchins and Carlos Mier were to share best man duties.

Several fans camped overnight to catch a glimpse of the couple and the streets were festooned with bunting in scenes usually reserved for a royal wedding.

Reverend Colin Renwick, who will marry the couple, received huge cheers as he arrived at the cathedral for the 4.00pm service (1500GMT).

The 27-year-old Sears has already become accustomed to the limelight, often finding herself in the cameraman's sights while watching Murray courtside at events all around the world.

She too grew up in a tennis-loving home with father Nigel Sears formerly the LTA's head of women's tennis.

Shedding her demure image, Sears hit the front pages during this year's Australian Open when she was filmed muttering expletives in the direction of the box of Czech opponent Tomas Berdych.

She turned up at the next match wearing a "parental advisory explicit content" jersey.

Sears was once described by Judy Murray as "the best thing to happen to Andy".

But he reportedly upset her when in January this year he sent a 'joke' message to a fan saying: "We are getting married just after Wimbledon, should be a great day," only to have to issue a retraction in a follow-up tweet.

The world number three player is hosting the reception at his own 15-bedroom Cromlix House Hotel, which he bought two years ago for Â£1.9 million ($2.8 million, 2.6 million euros).

Pubs in the town got into the spirit, offering champagne and strawberries to mark the occasion.

Scottish First Minister Nicola Sturgeon offered her support, saying: "Andy is a local hero there but he is also a Scottish sporting superstar, and the whole nation will be delighted for him and his new wife."

"We've been together like nine-and-a-half years and we've lived together for six or seven years as well," he said.

"So, I don't think a whole lot's going to change."

Murray and Dunblane share a painful past after the town was hit by tragedy in March 1996 when Thomas Hamilton shot 16 pupils and a teacher dead at the Scot's primary school.

The tennis player, who had to hide in the school during the massacre, broke down in tears when discussing it during a television interview.

Comments
Topics mentioned in this article
Andy Murray Tennis
Get the latest updates on IPL 2021, IPL Points Table , IPL Schedule 2021 , live score . Like us on Facebook or follow us on Twitter for more sports updates. You can also download the NDTV Cricket app for Android or iOS.