Murray, back on court after playing the late match on Thursday night, took his chances against Istomin on a few key points, edging out the world number 43 in two tight sets in just over an hour and a half. 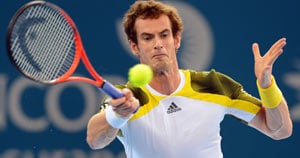 Defending champion Andy Murray moved into the semi-finals of the Brisbane International on Friday when he downed a tenacious Denis Istomin of Uzbekistan 6-4, 7-6 (7/3).

Murray, back on court after playing the late match on Thursday night, took his chances against Istomin on a few key points, edging out the world number 43 in two tight sets in just over an hour and a half.

The Scot broke Istomin once in the first set -- his only break point of the match -- then came from 1-3 down in the tie-break to win the next six points and take the match.

By contrast, Istomin had two break points on Murray's serve but was unable to convert either.

Murray, who had a tough three-setter against Australia's John Millman in the previous round, was happy with his form this early in the season.

"It was a decent match, there were a few long rallies -- it was quite a tough time of day to play on this court because of the shadows," Murray said.

"But for the most part, it was pretty good quality. He served well for the majority of the first set, and especially well at the beginning the second.

"I didn't really have that many chances on returns, so I needed to serve well today. That helped."

Murray now plays occasional training partner Kei Nishikori, the Japanese number one, whom he beat in the quarter-finals of last year's Australian Open.

Nishikori, who reached the final four with a 6-4, 7-6 (7/3) win over 2012 runner-up Alexandr Dolgopolov, said he was looking forward to the challenge of playing Murray.

"He could be the next number one player so it's going to be tough," the 23-year-old said.

"I think I lost a couple of times, three or four times, against him. He always plays good. He doesn't give me easy points.

"Hopefully I'll play well and be aggressive and try to go to the net more often."

The Bulgarian, ranked 48th in the world, has been impressive all week and won easily against seventh seeded Austrian Jurgen Melzer 6-3, 6-2.

He upset second seed Milos Raonic in straight sets in the second round, blasted 17 aces against Melzer to take his tally to 37 aces in three matches.

"I've been serving quite well these days, I've been feeling good all over the court in general," he said.

"Today was also one of these matches I wasn't feeling 100 percent on the court, but I had to get through it.

"Then actually the serve was the tool that got me out of there. I was pretty happy with that."

Baghdatis also caused an upset when he downed third seed Gilles Simon 6-3, 6-4, breaking the Frenchman once in each set.

"I started a bit slow, making some unforced errors," Baghdatis said. "But then I started to find the rhythm and started playing very aggressively. I'm happy with the way I'm playing."

Comments
Topics mentioned in this article
Tennis Andy Murray Kim Clijsters Denis Istomin
Get the latest updates on ICC T20 Worldcup 2022 and CWG 2022 check out the Schedule, Live Score and Medals Tally. Like us on Facebook or follow us on Twitter for more sports updates. You can also download the NDTV Cricket app for Android or iOS.