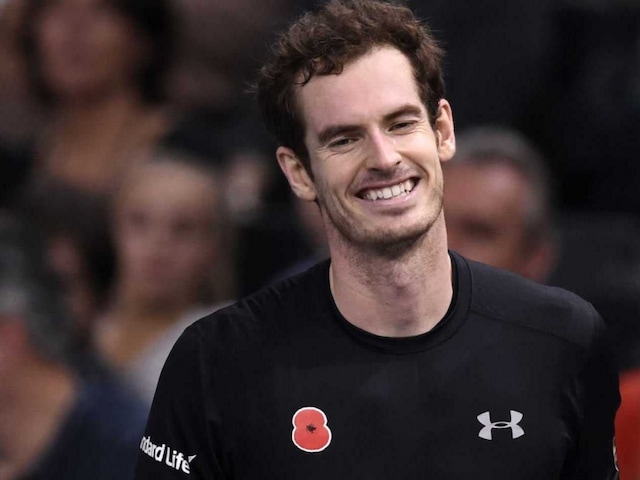 Andy Murray smiles after booking a place in the last four of the Paris Masters.© AFP
Paris:

Andy Murray reached the Paris Masters semi-finals for the first time on Friday, but it needed a marathon effort to see off the last remaining Frenchman, Richard Gasquet.

Five times previously Murray had fallen in the quarter-finals of the ATP's regular season finale and he will now play either John Isner or David Ferrer for a place in Sunday's final.

The first set was a 73-minute cliffhanger.

Murray stormed out of the blocks to lead 3-0, but with his first serve faltering, Gasquet found a way to work his way back into it, levelling at 4-4 after a break to love in the seventh game.

Murray also let slip a 3-1 lead in the tie-break and had to save a set-point at 5-6, but the second seed pushed Gasquet into making errors off his forehand side and he finally edged it 9-7.

It was Gasquet though who looked the stronger and a sloppy game from a frustrated looking Murray gave Gasquet a break to lead 4-2.

That proved to be enough for the Frenchman to win the set as he comfortably held serve twice.

There were worrying signs from Murray minutes later as he grimaced in pain after stretching for a return, but he then erased two break points to hold serve.

Two games later, however, there was to be no reprise from the Scot as Gasquet sealed the break with a superb forehand crosscourt drive off a big first serve.

Murray broke back immediately to level at 2-2, however, and with Gasquet visibly tiring he grabbed the break he needed in the eighth game when the 10th seed netted under pressure.

Comments
Topics mentioned in this article
Andy Murray Richard Gasquet Tennis
Get the latest Cricket news, check out the India cricket schedule, Cricket live score . Like us on Facebook or follow us on Twitter for more sports updates. You can also download the NDTV Cricket app for Android or iOS.