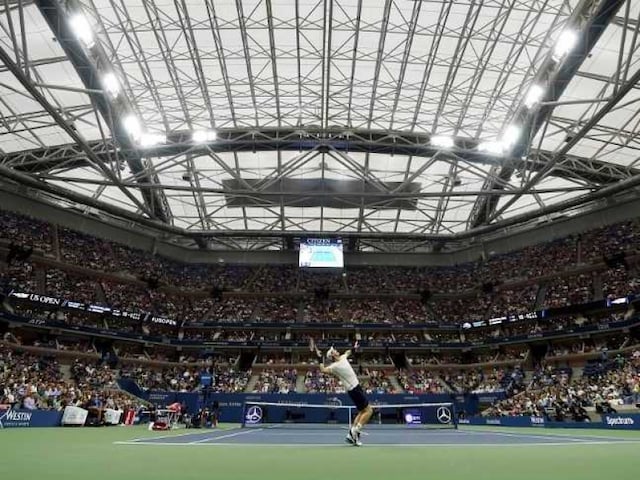 Andy Murray and a few others have complained about too much noise at the US Open's Arthur Ashe Stadium.© AFP

Andy Murray believes players will learn to love the constant noise inside the US Open's showpiece Arthur Ashe Stadium, a cacophony of 22,000 fans amplified to eardrum-busting levels by the effect of the arena's closed roof.

Murray had the chair umpire demand fans cut their chatter early in his second round win against Spain's Marcel Granollers on Thursday as the noise was becoming too big a distraction.

The world number two was the latest player to voice concerns over a din made worse by the torrential rain battering the new USD 150 million roof.

"You can't hear anything. You could hear the line calls, but not so much when the opponent was hitting the ball or even when you're hitting the ball," said Murray after his 6-4, 6-1, 6-4 win.

"It's not just the eyes, it's the ears, it helps us pick up the speed of the ball, the spin that's on the ball, how hard someone's hitting it.

"If we played with our ears covered or with headphones on, it would be a big advantage if your opponent wasn't wearing them."

Despite the challenges, Murray believes players will get used to the noise which has long been a factor at the US Open, especially during the tournament's raucous night sessions.

"I'm sure if the feedback is that the TV or the spectators aren't enjoying the match as much then they will look into it and try and change it," he predicted.

"But if it's fine on TV, which from what I have heard it is fine on TV -- I don't know what the fans have said about it yet, but the players will adjust."

On Wednesday, Latvia's Anastasija Sevastova complained that it was hard to even hear the ball coming off Garbine Muguruza's racquet during her shock win over the third seed on Ashe.

That match was played with the roof open, but there was still an enclosed effect due to the massive, permanent wing supports which cover the high surrounds of the arena.

"Sometimes you don't hear the ball hit, so it's coming to you and you think it's still somewhere there," said Sevastova.

"It was loud during points and everything. I mean, you don't expect it."

Muguruza said she had never experienced such bedlam in a playing arena.

A bit too much

Rafael Nadal, who completed his second round match with the roof closed for the first time at the tournament on Wednesday, admitted he was surprised by the din.

"There was a little bit more noise than usual. I have been playing here for so many years and I don't remember that noise when you are playing. Was a little bit strange," said the Spaniard.

"For some moments it was a little bit too much during the points."

However, for Nadal, the problem with the Ashe arena, the biggest tennis stadium in the world, lies mainly with the inability of New York fans to sit still for sustained periods.

He wants stewards to be more diligent when it comes to allowing fans to still take their seats even when a changeover is already finished.

"Every time you are waiting. I know it's difficult because the court is very big," said the 30-year-old.

Comments
Topics mentioned in this article
Andy Murray Garbine Muguruza Rafael Nadal Marcel Granollers Tennis
Get the latest Cricket news, check out the India cricket schedule, Cricket live score . Like us on Facebook or follow us on Twitter for more sports updates. You can also download the NDTV Cricket app for Android or iOS.