Andy Murray has set his sights on capping a glorious year by winning the season-ending ATP World Tour Finals on home turf at London's O2 Arena. 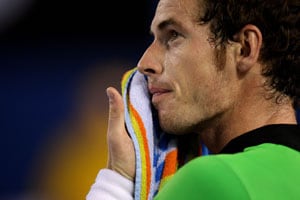 Andy Murray has set his sights on capping a glorious year by winning the season-ending ATP World Tour Finals on home turf at London's O2 Arena.

After spending much of his career struggling in vain to break the vice-like grip Roger Federer, Rafael Nadal and Novak Djokovic held on the sport's top prizes, Murray has finally earned the right to be regarded as an equal to those three giants after a remarkable five months.

In July, the 25-year-old became the first Briton to reach the Wimbledon final since 1938 and although Murray wept tears of frustration on Centre Court after Federer took the title, that run proved a defining moment.

While Murray had previously reacted to significant defeats by heading into prolonged periods of introspection and poor form, this time his response was that of a champion.

Instead of wallowing in self-pity, Murray came back to Wimbledon for the Olympics just weeks later and thrashed Federer in straights sets to take the gold medal in the men's singles final.

With the confidence from that triumph still racing through his veins, Murray headed to New York, where he ended his long wait to win a first Grand Slam title by defeating Novak Djokovic over five dramatic sets in the US Open final in September.

Now Murray returns to play in front of a British audience for the first time since his US Open breakthrough and he is keen to wrap up his golden year with one more title.

"There's always pressure at all of the major tournaments you play but I feel a little bit more relaxed coming in this year than I have in previous years because I managed to win the US Open," Murray said.

"The only thing I can guarantee is that I'll give 110 percent on the court, fight as hard as I can until the end of all the matches and see where that gets me. Hopefully it'll get me a few wins.

"Against all the guys here you're going to have to play a top-quality match to win."

Murray has been reunited with coach Ivan Lendl this week for the first time since that momentous night in New York.

Lendl only travels with his charge for certain tournaments and stayed at home in the US while the Scot played in Tokyo, Shanghai and Paris, where Murray suffered a shock exit against Poland's Jerzy Janowicz in the third round.

Murray, who is making his fifth appearance at the Tour Finals, said: "I always enjoy having Ivan around. He's been a great asset to me and all the guys I work with.

"He's been very easy to work with and helped me at the big events this year.

"He's helped me come back from some tough losses and finish the year in the slams very well. I hope we can have a good tournament."

The tournament usually features the top eight players in the world rankings, although reigning French Open champion Rafael Nadal is continuing his recovery from a knee injury, handing Serbia's Janko Tipsarevic a place in the draw.

Murray is in Group A along with Djokovic, Tomas Berdych and last year's runner-up Jo-Wilfried Tsonga, and it is Berdych who will be the world number three's first opponent on Monday.

Defending champion Federer, who will lose the number one ranking to Djokovic on Monday, takes on Tipsarevic, Spain's David Ferrer and former US Open champion Juan Martin del Potro in Group B.

Federer has won the Tour Finals a record six times and he underlined his desire to add a seventh crown when he pulled out of the Paris Masters at the last minute to rest ahead of his trip to London.

Del Potro, who is back at the Tour Finals for the first time since in 2009, arrives in London on the back of tournament wins in Vienna and Basle, where he beat home-town hero Federer in the final.

"It's a pleasure to be part of the eight players, it's an honour," Del Potro said.

"We have big names playing this week, they're favourites more than me, but to be here is a gift after my wrist injury."