Second seeded Italian Andreas Seppi battled from a set down to see off fourth seed Thomaz Bellucci of Brazil to win the ATP Kremlin Cup title on Sunday. 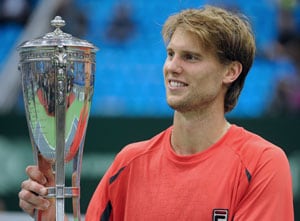 Second seeded Italian Andreas Seppi battled from a set down to see off fourth seed Thomaz Bellucci of Brazil to win the ATP Kremlin Cup title on Sunday.

"Thomaz started well and was serving very good, while I experienced problems on return," Seppi said. "But I tried hard to stay close and put pressure on him.

"He played two bad games when he was serving for the match in the second set and it added me some confidence and helped me to win the tie-break and especially in the third set."

Bellucci, 24, who was playing his first ever indoor final, broke his opponent's serve in the fourth game for a 3-1 lead, which he held for a one-set lead in 30 minutes.

No big serves were produced in the second set before the seventh game, when the opponents began trading breaks.

Bellucci, ranked 41st, was serving for the match twice but the Italian refused to surrender and broke back twice forcing a tiebreak, which he won to level proceedings after one hour 27 minutes on court.

In the deciding set Seppi was in command breaking his rival's serve twice to take the set and the match in two hours 11 minutes.

The winner Seppi got a silver trophy by Cartier and 121,520-dollar prize purse, while runner-up Bellucci received 64,000 of prize dollars.

Comments
Topics mentioned in this article
Andreas Seppi Tennis
Get the latest Cricket news, check out the India cricket schedule, Cricket live score . Like us on Facebook or follow us on Twitter for more sports updates. You can also download the NDTV Cricket app for Android or iOS.