Andre Agassi Alienated me, Marriage was a Mistake: Brooke Shields 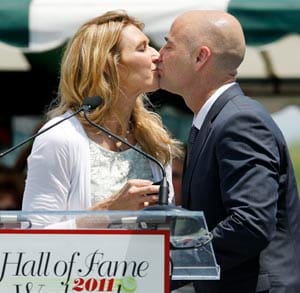 Agassi is currently married to Graff, another former tennis star.

The 49-year-old actress, who split from the sports star, 44, in 1999 after two years of marriage, wrote in her new memoir 'There Was a Little Girl', she always had doubts about their relationship and knew she had made a mistake the day after their wedding, reported People magazine.

"It hit me all of a sudden- I knew I had made a mistake. For the next two years we saw very little of each other. I was working on my show, 'Suddenly Susan,' and he was playing at various tournaments. He alienated me when he lost and was on to the next tournament after he won. We were drifting apart," she has written.

The former couple decided to split after Shields said she was not happy and Agassi confessed he had been 'addicted to crystal meth' since they started dating in 1993, but she insists she wanted to work things out. (Sania Mirza Wants Deepika Padukone to Player her On-Screen)

"I was the one who had supported him unconditionally when he told me (after we started dating) that he was basically bald and had been wearing hairpieces most of his adult life.

"Why would this have been any different? I would have been his biggest advocate and supporter," the memoir reads.