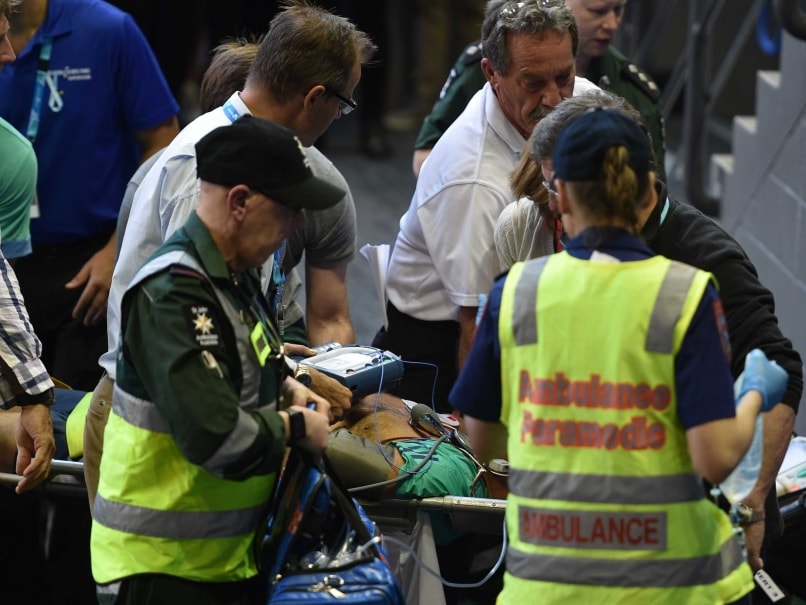 Medical staff use a stretcher to carry Ana Ivanovic's coach Nigel Sears, from the stadium during the women's singles match against Madison Keys of the US on day six of the Australian Open tournament in Melbourne.© AFP

Ana Ivanovic's coach Nigel Sears, who is Andy Murray's father-in-law, needed medical treatment inside Rod Laver Arena during her match Saturday in a dramatic incident that halted play for nearly an hour. (Read More in Tennis)

The former world number one was playing her third round match against American Madison Keys at the time and was leading 6-4, 1-0 when the incident occurred during a changeover.

Ivanovic appeared extremely concerned as she looked on, before the players were taken off court as medics attended Sears on a stairway. He was later stretchered away.

The Australian Open live blog identified him as Sears, who is not only Ivanovic's coach but also the father of Murray's pregnant wife Kim Sears, who is due to give birth within weeks.

Murray was playing on the neighbouring Margaret Court Arena, watched by his mother Judy, apparently unaware of what happened.

ESPN's courtside reporter, former player Pam Shriver, said she had been told by Ivanovic's team that Sears had complained of feeling unwell 30 minutes before the match.

She said he was conscious and had been taken to hospital.

Tournament organisers had no immediate update on his condition, but play resumed just under an hour later with Ivanovic looking composed.

It was Ivanovic's second match in a row interrupted by a medical emergency. She was left badly shaken when an elderly spectator fell on a flight of stairs during her match in the same arena on Thursday.

Comments
Topics mentioned in this article
Ana Ivanovic Madison Keys Tennis
Get the latest updates on India vs Australia Series, check out the India vs Australia Schedule for 2020-21 and Ind vs Aus live score . Like us on Facebook or follow us on Twitter for more sports updates. You can also download the NDTV Cricket app for Android or iOS.