Former world number one Ana Ivanovic eased into the second round of the China Open on Saturday, defeating American Christina McHale in straight sets 6-3, 6-2. 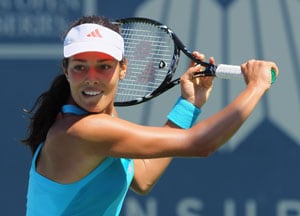 Former world number one Ana Ivanovic eased into the second round of the China Open on Saturday, defeating American Christina McHale in straight sets 6-3, 6-2.

The 24-year-old Serbian played aggressively from the start, hitting big first serves and powerful forehand drives which McHale, ranked 28 in the world, was unable to match.

Ivanovic's returns from McHale's service game were too good for the 20-year-old, with the French Open champion of four years ago breaking the American in the eighth game of the first set and twice in the second.

"I think that was the best service game I have ever had," said the eleventh seed, who wrapped up victory within an hour, agreeing that it had been a "perfect" start to the Beijing tournament.

"The last match I played, in Tokyo, I served terribly. It was probably the worst I served in a very long time, so I was really determined to do better today," she said.

"I really took more time and focused on that because I knew I could serve well and I did it in practice. So I had attention to serve well today, and it worked well and I'm very pleased."

The world number 12 will play American Varvara Lepchenko, who defeated Tsvetana Pironkova of Bulgaria, in the second round.

Ivanovic admitted she didn't know much about her next opponent but was aware that "she serves big" and has "a powerful game".

"She's been playing much better lately, and she had some really good results," Ivanovic said of Lepchenko. "It's going to be a tough match."

Earlier in the day Taiwan's Hsieh Su-Wei, winner of the Guangzhou Open this month, defeated Zheng Saisai of China 6-2, 6-3 while in an all-Chinese clash Zhang Shuai beat Wang Qiang 6-3, 6-2.

Romina Oprandi of Switzerland and Spain's Carla Suarez Navarro also progressed to the second round, as did Yaroslava Shvedova from Kazakhstan who was 6-4, 4-1 up when her opponent and 12th seed Dominika Cibulkova retired due to an injury.

Comments
Topics mentioned in this article
Tennis Ana Ivanovic Christina McHale
Get the latest updates on India vs Australia Series, check out the India vs Australia Schedule for 2020-21 and Ind vs Aus live score . Like us on Facebook or follow us on Twitter for more sports updates. You can also download the NDTV Cricket app for Android or iOS.