Third-seeded Nicolas Almagro beat Italian Filippo Volandri of Italy 6-2, 6-2 to reach the quarterfinals of the Mexican Open on Wednesday as he attempts to claim his third straight tournament on clay. 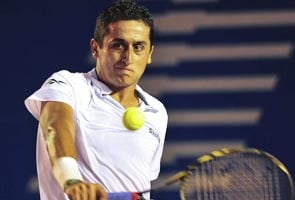 Third-seeded Nicolas Almagro beat Italian Filippo Volandri of Italy 6-2, 6-2 to reach the quarterfinals of the Mexican Open on Wednesday as he attempts to claim his third straight tournament on clay.

The Spaniard downed Volandri in just over an hour as he storms closer to adding the Mexico trophy to the titles he picked up at Argentina and Brazil in the last two weeks.

Almagro converted five of his seven break points on his way to winning his 11th straight match. He faces Santiago Giraldo of Colombia in the quarterfinals.

"It will be tough match," Almagro said. "It's the quarterfinals and nobody gives you anything."

Other seeded men in the tournament had mixed results.

No. 4 Stanislas Wawrinka of Switzerland needed three set to defeat Fabio Fognini of Italy 5-7, 6-3, 7-5. Sixth-seeded Alexandr Dolgopolov of Ukraine has an easier time, winning over Carlos Berlocq of Argentina 6-1, 6-4.

However, No. 5 Albert Montanes of Spain went out against Santiago Giraldo of Colombia 6-3, 6-4.

On the women's side in the combined ATP-WTA event, top-seeded Julia Goerges of Germany was eliminated by Anabel Medina Garrigues of Spain 6-4, 7-6 (8).

Fourth-seeded Gisela Dulko of Argentina defeated Silvia Soler Espinosa of Spain, 6-1, 6-1, and No. 6 Arantxa Parra Santonja of Spain won her match when Lesia Tsurenko of Ukraine retired in the second set while trailing 6-3, 1-0.

Comments
Topics mentioned in this article
Tennis Nicolas Almagro Albert Montanes Juan Carlos Ferrero Fernando Verdasco Rafael Nadal
Get the latest Cricket news, check out the India cricket schedule, Cricket live score . Like us on Facebook or follow us on Twitter for more sports updates. You can also download the NDTV Cricket app for Android or iOS.