The 42nd-ranked Alize Cornet was too strong and consistent for the misfiring Eugenie Bouchard, winning the summit clash of the Hobart International in just 68 minutes. 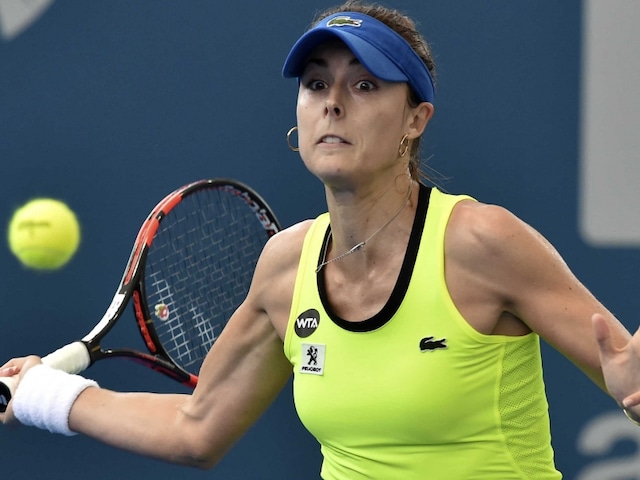 France's Alize Cornet stormed to a 6-1, 6-2 win over Eugenie Bouchard to claim her fifth career title at the Hobart International on Saturday. (Read More in Tennis)

The 42nd-ranked Cornet was too strong and consistent for the misfiring Canadian, winning the decider in 68 minutes in windy conditions.

"I was very focused for the whole tournament and the whole match today, now I can let go," Cornet said.

"It's my fifth title. It's been two years that I haven't won a title, so it feels great."

Bouchard hit 34 unforced errors for the match to Cornet's 17, a key difference. The Canadian struggled in the windy conditions, only holding serve once in the match.

"I was handling the wind much better than she did," Cornet said.

"I think she got a bit frustrated and she was trying to play winners too early in the points.

"I was patient, trying to be aggressive and playing the right shot at the right time and serving very well also. It all worked out my way today."

Cornet broke Bouchard's opening service game and then gave back the service break before reeling off five straight games to take the first set.

Bouchard broke Cornet's opening service in the second set and led 2-0 before the French star won six games in a row to take the set and the match.

It was 25-year-old Cornet's first WTA title since winning at Katowice in 2014, and gave her a perfect tune-up for next week's Australian Open in Melbourne.

Cornet will face Serbia's Bojana Jovanovski in the first round of the year's opening Grand Slam, with a possible second-round clash with second seed Simona Halep.

The 47th-ranked Bouchard, who beat three seeded players -- Alison Van Uytvanck, Camila Giorgi and Dominika Cibulkova -- on the way to the Hobart final, takes on another Serb Aleksandra Krunic in her first-round match in Melbourne.

"(It was a) rough day at the office. I didn't have the energy and emotional control as I need too, to be able to perform well," Bouchard said.

"I woke up and had personal family issues at home and things like that, and I couldn't keep my focus.

"As soon as things started going downhill, I really couldn't keep my emotions together."

Comments
Topics mentioned in this article
Alize Cornet Eugenie Bouchard Tennis
Get the latest updates on IPL 2020, check out the IPL Schedule for 2020 and Indian Premier League (IPL) Cricket live score . Like us on Facebook or follow us on Twitter for more sports updates. You can also download the NDTV Cricket app for Android or iOS.