Alize Cornet of France defeated Yanina Wickmayer of Belgium 7-5, 7-6 (1) on Sunday to win the Gastein Ladies for her first title in four years. 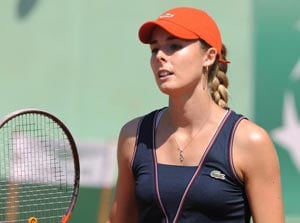 Alize Cornet of France defeated Yanina Wickmayer of Belgium 7-5, 7-6 (1) on Sunday to win the Gastein Ladies for her first title in four years.

The seventh-seeded Cornet, who is ranked 73rd, earned her second career title after winning in Budapest, Hungary in 2008 and is now 2-3 in WTA finals. She lost the final in Strasbourg last month.

"I can't believe it," Cornet said. "This was the tournament I wanted to win this year. I can't believe I didn't win a title for the last four years so now it's all happiness."

The former 11th-ranked Cornet broke the second-seeded Wickmayer's serve at 5-5 and then held to take the opening set.

She was 5-3 up in the second set against the second-seeded Wickmayer but failed to serve out the match before dominating the tiebreaker.

Cornet converted her first match point as Wickmayer sent a forehand into the net.

Wickmayer is now 4-4 in finals after last winning a title in Auckland, New Zealand, in January 2010.

Comments
Topics mentioned in this article
Tennis Gilles Muller Svetlana Kuznetsova Alize Cornet Yanina Wickmayer Caroline Wozniacki Francesca Schiavone Maria Sharapova
Get the latest updates on India vs Australia Series, check out the India vs Australia Schedule for 2020-21 and Ind vs Aus live score . Like us on Facebook or follow us on Twitter for more sports updates. You can also download the NDTV Cricket app for Android or iOS.