Aisam believes that both he and Bopanna have matured as players since ending their pairing two years ago. 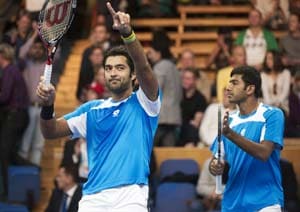 Excited about teaming up with his friend Rohan Bopanna once again, Pakistani tennis player Aisam-ul-Haq Qureshi said he took the decision to renew his partnership with the Indian after weighing all its pros and cons.

Aisam, after winning the men's doubles title with his Dutch partner Jean-Julien Rojer on Sunday in Stockholm, told PTI that he has weighed his options.

"The decision has been taken after considering all pros and cons after Rohan had shown interest in resuming our partnership on the ATP circuit," Aisam said.

He added that it would be interesting to resume his doubles partnership with Bopanna as both of them had matured as players since ending their pairing two years back.

"Both of us carry a lot of experience now on the international circuit even though we have played separately for a while now," he said.

Aisam and Rojer won their second title of the season in Stockholm on the ATP circuit and this has increased their chances of qualifying for the Barclays ATP World Tour Finals in London where the top eight doubles pairs of the year will compete.

"The win in the Stockholm Open has come at just the right time and I had set a target of winning three tournaments this year, I have achieved two of them."

He said he and Rojer were also well prepared for the Basil Open in Paris in the coming weeks. The duo will end their doubles pairing at the end of the 2013 season.

Comments
Topics mentioned in this article
Tennis Maria Sharapova Leander Paes Lukas Dlouhy Andy Roddick Rajeev Ram Su-Wei Hsieh Rohan Bopanna Aisam-Ul-Haq Qureshi
Get the latest updates on India vs Australia Series, check out the India vs Australia Schedule for 2020-21 and Ind vs Aus live score . Like us on Facebook or follow us on Twitter for more sports updates. You can also download the NDTV Cricket app for Android or iOS.