At the age of 31, Li Na has not only become the first Asian to reach world number three but her game is evolving cleverly enough to hope for further triumphs in 2014. 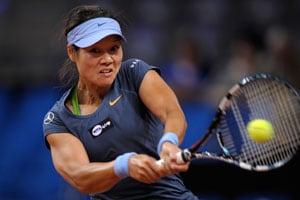 Li Na's fine performance in getting to the final of the season-ending WTA Championships was one in the eye for those who suggested that her best was behind her.

Instead, at the age of 31, Li has not only become the first Asian to reach world number three but her game is evolving cleverly enough to hope for further triumphs in 2014.

Although Li conceded the last nine games in a 2-6, 6-3, 6-0 loss to Serena Williams on Sunday, there was evidence of new tactical options and growing self-confidence as she overcame Victoria Azarenka, the world number two, and then troubled the world number one in the final.

At first she downplayed her hopes and achievements, as perhaps she needed to, both for modesty's sake and to avoid self-inflicted pressure.

"Number three was the goal at the beginning of the year. I don't know, lucky or happy in the last tournament, I made it," she said.

"So it's a pretty good ending for 2013," Li added, prompting the question whether she would now aim for world number two.

"Why not?" she said, shrugging her shoulders.

More importantly she will keep her focus to day-to-day matters, like adding to her ability to take the ball early and dictate the pattern of the rallies, like improving and mixing in more serve-volleys, and paying close attention to her schedule to avoid injury and exhaustion.

Li is also trying to access potential still contained within her and to release unused abilities.

Her coach Carlos Rodriguez has, she says, been trying to get her to unlock herself, not get so tight inside, and to play more freely.

"I don't know, I think maybe it's different between Chinese and Western, because I think Western people, they like to share how you are feeling now," the woman from Wuhan said.

"For myself, if I feeling something, I never try to talk to the team. I always block (the feeling). I always feel I'm strong enough, I can fix everything.

"But this is I think a weakness. So I think the real strong person, for sure, they will speak out, because they find someone can help them to be even more stronger.

"So that's why I was feeling terrible every time I talked to Carlos. But now I am feeling much better, because I try to open my mind a little bit to share the feeling.

"If he really want it, I can be more like Serena. Maybe he should teach me (that)," she said with a hint of the humour which has made her so popular.

Li also opened up about how differently things were done when she was training in China.

"I always try, but sometimes (what I tried) didn't work," she said.

"I think when I was growing up, I could not show how good I am, because when I was starting to play tennis, and when I won a tournament, the coach was so tough.

"If I win a tournament and next day I was training and I made a mistake, for sure she would say, 'What? You just win one tournament. Are you thinking you can win another one? Why didn't you train harder?'

"I think she always punched me, so that's why. I didn't have confidence to show how good I am."

Identifying and then admitting these inhibitions will, Li hopes, be the first steps towards attitude changes and further improvements on the tennis court.

As for how to beat Serena Williams, something she has managed only once in 11 attempts -- more than five years ago -- Li was more cautious.

"I don't think any other player gives me the same feeling," she admitted, referring to the American's ability to overwhelm not only with sheer power but with her presence.

One remedy Li attempted during the final on Sunday against the 32-year-old American brought smiles both from her and her listeners.

Li can nevertheless look at 2014 fully in the face and feel that, though she will be 32 in February, the doubters have already been proved wrong and that much is still possible.

Comments
Topics mentioned in this article
Tennis Na Li
Get the latest Cricket news, check out the India cricket schedule, Cricket live score . Like us on Facebook or follow us on Twitter for more sports updates. You can also download the NDTV Cricket app for Android or iOS.