A Former No. 1 at Her Best, But Williams is Even Better

Serena Williams brushed aside Victoria Azarenka 3-6, 6-2, 6-3 in the Wimbledon 2015 quarterfinal. 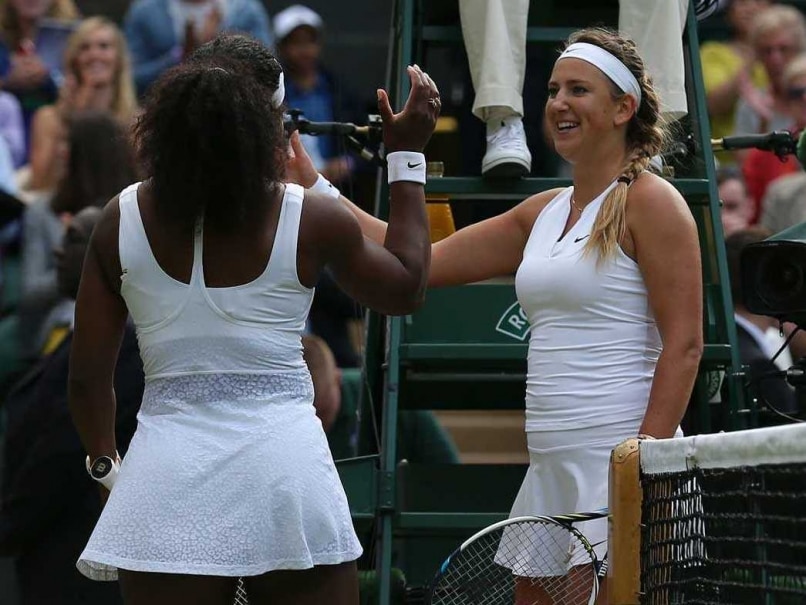 On the draw sheet, it was a quarterfinal between the No. 1 seed and the No. 23 seed.

On the now-patchy grass of Centre Court, though, it looked much more like No. 1 versus No. 2, as Serena Williams and Victoria Azarenka kept clenching fists, doubling over with desire and generating puff after puff of white chalk as their groundstrokes and serves landed on the lines under Grand Slam pressure. (Also read: Can Sharapova end long drought against Serena?)

Azarenka, a proud and complex Belarusian, will tell you that Williams brings out the best in her, which certainly seemed true in the opening phase of this remarkable duel. She has perhaps never played better on a big stage than she did in winning the first set, but for all Azarenka's formidable talent and renewed drive, she also has a habit of inspiring the best in Williams, too.

For now and for who knows how much longer, Williams' extra gear remains one that no other woman can match, and she is now in full rumble and into her latest Wimbledon semifinal - this one against Maria Sharapova - after Tuesday's 3-6, 6-2, 6-3 victory.

There has been a lot of winning ugly in 2015 for Williams, 33, who has had to rally repeatedly and was two points from defeat against the unseeded Heather Watson in the third round last week. But this was winning pretty. Very pretty.

"I can't say I went out there and didn't play well," Azarenka said. "We just saw today why Serena is No. 1. I haven't seen her play like this, honestly, even in the last matches before that."

Pure numbers have their narrative limits in tennis: The signature features of Tuesday's match were its gale-force intensity and its shriek-filled soundtrack, the consistent depth and weight of the shots.

But the statistics sheet was a fine piece of supporting evidence. Williams finished with 46 winners and 12 unforced errors in a match where many of the errors came at the end of high-quality rallies.

Azarenka was No. 1 before Williams reclaimed the top spot in 2013, and Azarenka's 2014 season was derailed by personal issues and a chronic foot problem.

But Williams has resumed being the spoiler in 2015, beating Azarenka in Madrid after Azarenka held three match points on her own serve before cracking, then beating her again in a fiery three-set match at the French Open, after which Azarenka broke a chair in the locker room. She expressed amazement there that Williams always eemed to reserve her finest work for her and Sharapova.

Azarenka, 25, did not seem to let those setbacks affect her will to compete Tuesday or let them keep her from embracing Williams warmly at the net after the hostilities. But there was still no changing the story arc: Williams has a 17-3 career edge, and a 10-0 edge in Grand Slam play.

Of the elite players, Azarenka might push Williams hardest, but clearly it is not yet hard enough.

She is already tapping into Williams' former brain trust, hiring Sascha Bajin, Williams' longtime hitting partner and close friend, earlier this season. With Azarenka's primary coach, Wim Fissette, home in Belgium after the birth of a child, Bajin played a more central role at Wimbledon and warmed up Azarenka with big serves and advice on Tuesday.

But the really hard part is beating Williams in a big match. It is now Sharapova's turn to take another shot, and her record against Williams is even worse: 2-17, with few classics in the mix.

She has not beaten Williams in 11 years, not since 2004, the year she became a star by winning Wimbledon at age 17. Williams, at this late stage, has to be deep inside her head, and if Sharapova is to have any serious chance, she will have to lift her level in a hurry after her shaky, error-filled victory over CoCo Vandeweghe in Tuesday's first quarterfinal on Centre Court.

Mouratoglou at least provided Sharapova with some bulletin-board material.

"She does not have a mental block against Serena," he said. "Serena simply plays tennis much better than she does. For me, Azarenka is much better than Sharapova. There's no discussion. Sharapova is a great champion. She has great qualities. She fights incredibly and has tremendous mental strength. But at some stage, her level of play hits a ceiling.

"That said, Serena is not immune to a bad match, right? All streaks have to end, but even if she has a bad match one day and loses, we cannot say there is not an enormous gap in their level of play."

Cocksure as that sounds, it is hard to disagree, even after the entertaining Australian Open final that Williams won, 6-3, 7-6 (5), over Sharapova in January.

Comments
Topics mentioned in this article
Victoria Azarenka Serena Williams Tennis
Get the latest updates on IPL 2021, IPL Points Table , IPL Schedule 2021 , live score . Like us on Facebook or follow us on Twitter for more sports updates. You can also download the NDTV Cricket app for Android or iOS.