Swimmers are split into racing and recreational groups -- both the dead man and the hospitalised woman were taking part in the leisure category, which is for slower swimmers, according to reports. 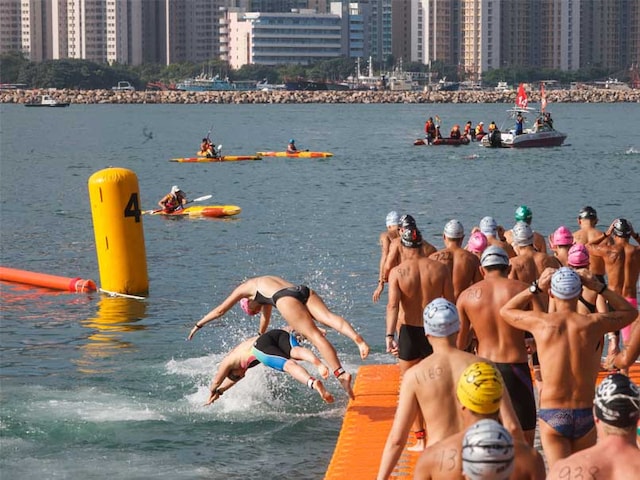 It is the first death in the race since it was resumed in 2011 after a 30-year break.© AFP

A swimmer drowned Sunday in Hong Kong and another was left in critical condition as they took part in the city's annual cross-harbour swim, which attracts world-class international competitors.

Local media said the man who died was rushed to hospital after being pulled unconscious from the water by a rescue boat. He was reported to be in his forties.

A woman thought to be in her 60s was separately pulled unconscious from the water and is reported to be in intensive care in hospital.

The 1,500-metre race saw around 3,000 people swim between two piers on opposite sides of Hong Kong's famous harbour -- 500 up from the previous year according to reports.

Some local media questioned why only 10 extra lifeguards had been added when the field had expanded so much. There was a total of 120 lifeguards at the event, local broadcaster RTHK reported on its website.

Swimmers are split into racing and recreational groups -- both the dead man and the hospitalised woman were taking part in the leisure category, which is for slower swimmers, according to reports.

Local media cited the president of the Hong Kong Amateur Swimming Association defending the number of lifeguards as sufficient for the event.

"We are very saddened by the news and will do whatever possible to help his family get through this difficult time," the South China Morning Post cited Ronnie Wong as saying.

RTHK said Wong had confirmed the man's death and the woman's hospitalisation.

The weather was warm and sunny, with air temperatures reaching around 30 degrees Celsius (86 degrees Fahrenheit). However, some swimmers had complained of strong currents, the Post said.

It is the first death in the race since it was resumed in 2011 after a 30-year break, local media reported.

The decades-long hiatus was due to fears over pollution levels in the water.

Although water quality is said to have improved, there are still environmental concerns over the harbour, where rubbish is frequently seen floating in the water.