Michael Phelps Strikes First Gold Since Coming Out of Retirement

Michael Phelps claimed a gold medal as part of the United States' 4x200m freestyle relay at the Pan Pacific Championships, adding to his haul of international titles just four months into his comeback. 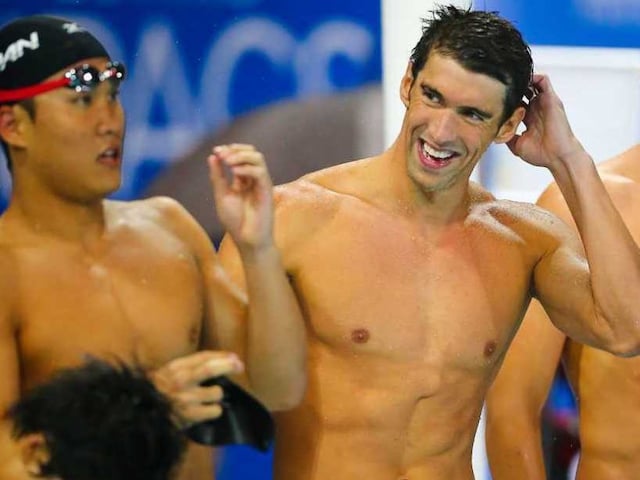 Australia's Cameron McEvoy upset a star-studded field to win the 100m freestyle at the Pan Pacific Championships Friday as Michael Phelps claimed his first international gold medal since coming out of retirement.

McEvoy swam the race of his life to hit the wall in the third-best time this year of 47.82 seconds ahead of US Olympic champion Nathan Adrian (48.30) and dual world champion James Magnussen (48.36).

Phelps, the 18-time Olympic champion, led to the turn before finishing fourth in 48.51sec, which clinched his place on the US team for the event at next year's world championships.

But the American also claimed a gold medal as part of the United States' 4x200m freestyle relay, adding to his haul of international titles just four months into his comeback.

"I was able to swim it exactly much the same as I swam this morning," Phelps said of the individual race. "I was out slow, back faster, my finish was really bad, but overall I know what I have to do to get better."

Only McEvoy, runner-up to fellow Australian Magnussen in the event at last month's Glasgow Commonwealth Games, bettered his preliminary time of 48.49sec from the morning heats to pull off a career-best victory.

"The outcome was more of a bonus than anything. I am just so happy tonight," said McEvoy, revelling in the opportunity of competing against the world's best.

"I was just so happy to be there in such great company in that race. I just wanted to enjoy it.

"When am I next going to be in race with people like that?"

Adrian, who nudged out Magnussen by one-hundredth of a second to win the Olympic 100m gold in London, said the 100m event could no longer be considered just a two-man contest.

"There are a lot of guys. It's silly to think that it's going to be James (Magnussen) and me winning every time because you've got guys like Vlad Morozov, fast Italian guys and Cam is amazing," Adrian said.

"It's definitely not a two-man game any more."

Magnussen, who has been troubled by a lower back problem, said he couldn't catch McEvoy on the night.

Magnussen admitted a week ago he was contemplating pulling out of the meet because of his chronic back problems.

"I couldn't have been in a better spot, I just couldn't go with him tonight," Magnussen said. "I didn't quite have the preparation to go fast tonight. It is what it is."

World and Commonwealth champion Cate Campbell powered to the front to beat her sister Bronte and American Simone Manuel in 52.72sec, a time slower than her heat swim of 52.62.

"I was feeling it a bit from the fast swim this morning, it was stinging a little bit, but I'm happy to come away with the win," Campbell said.

Campbell, who has her eyes on the Olympic title in Rio in 2016, said she will be taking some time off after a gruelling schedule.

"I'll definitely be taking some time off and then refocusing. We've got two years to go and it's looking very good."