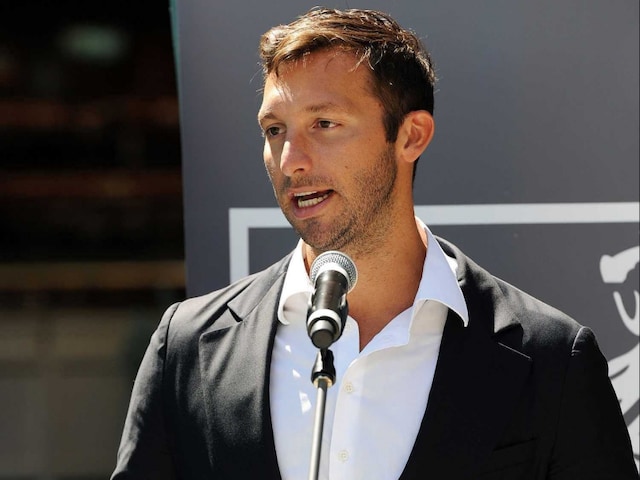 This file photo taken on October 31, 2012 shows Australia's five-time Olympic swimming gold medallist Ian Thorpe at the launch of his autobiography "This is me" in Sydney. © AFP
Sydney:

Australian swimming champion Ian Thorpe revealed he was gay in an interview on Sunday and said he was now comfortable admitting it after years of denying rumours about his sexuality.

The five-time Olympic gold medallist made the revelation in an interview with British presenter Michael Parkinson aired by Australia's Channel Ten.

"I have thought about this for a long time ... I am not straight," Thorpe said.

"This is only something that very recently, in the past two weeks, that I have been comfortable with telling the closest people around me exactly that."

Thorpe, 31, said he had "wanted to come out" for some time, but he didn't feel as if he could make the admission.

"The problem was that I was asked (about it) at such a young age (16) about my sexuality. I said to people that it was inappropriate to be asking a child such kind of questions and it's not appropriate for that question to be asked of anyone," he said.

Thorpe said he didn't feel ashamed about hiding the truth, adding "I am comfortable with saying that I am a gay man and don't want young people to feel the same way that I did.

"You can grow up, you can be comfortable and you can be gay." Thorpe also described his years of battling with depression in the emotional interview recorded last month.

He said he was on anti-depressants at age 19 and had contemplated suicide, but that he couldn't deal with the thought of leaving friends and family.

His decision to come out as gay attracted a flurry of supportive comments.

"He's been through a lot this year with depression and other things and hopefully that can allow him, as a person, to move forward," Hackett said.

Olympic diver Matthew Mitcham, who revealed he was gay in 2008, said he could "totally understand how difficult this whole process has been for him".

"I really hope this process gives him some peace and that the media and the public give him the same respect and the same overwhelming support I received in 2008," he told the Telegraph.

"(It) has clearly been a difficult struggle for him and I hope Australians appreciate the trust and confidence he has placed in us all by revealing he is gay," Croome said.

"Nothing has changed about Ian Thorpe. He is still a great Olympian and a great Australian," he added.

The swimmer -- known by his nickname "Thorpedo" -- retired in 2006 after a glittering career in which he ruled the pool from 1998 to 2004, taking nine Olympic medals and 11 world titles and setting 13 long course world records.

He returned to racing in 2011 but had a string of disappointing results leading up to his ultimately unsuccessful London Olympic bid the following year.

Since calling it quits for a second time in 2013, Thorpe has endured several health setbacks.

In February he began treatment for depression after a mixture of painkillers and anti-depressants left him disoriented on a Sydney street.

He was hospitalised for more than three weeks in April after battling serious infections for shoulder surgery. At one point there were rumours he would lose the use of his left arm, although they proved unfounded.

Previously, Thorpe strongly denied rumours of his homosexuality. In his 2012 autobiography "This Is Me", the swimmer wrote: "For the record, I am not gay and all my sexual experiences have been straight. I'm attracted to women, I love children and aspire to have a family one day."

He added: "I know what it's like to grow up and be told what your sexuality is, then realising that it's not the full reality. I was accused of being gay before I knew who I was."