Para-swimmer Sharath Gayakwad scripted history at the Asian Para-Games in Incheon, Korea by winning six medals to go past sprint legend P.T. Usha's record of most medals by an Indian in a multi-discipline event. 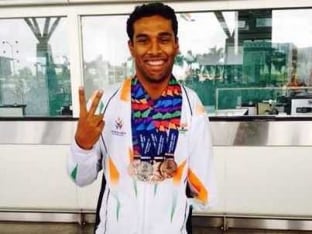 He was quite good at multi-tasking at the peak of his career. Two years after his retirement, former India Test skipper Rahul Dravid continues to inspire India's top sportspersons. Dravid, who recently joined hands with famed Indian athletes like MC Mary Kom, Pullela Gopichand, Anju Bobby George and Abhinav Bindra in the quest for Olympic glory, has been 'mentor' to Sharath Gayakwad, a para-swimmer who has created history in Incheon.

Sharath won six medals at the recently-held Asian-Para Games in South Korea, to go past sprint legend P.T. Usha's record of most medals by an Indian in a multi-discipline event. Usha had won five at the 1986 Asian Games.

Sharath's coach John Christopher praised the athlete and Dravid's contribution towards his success. "Sharath has performed exceptionally well. I'm extremely proud of his performance, more so because he has overcome a serious shoulder injury to achieve these results. With GoSports Foundation's support, he is being mentored by Dravid, whose advice has helped Sharath immensely."

Sharath began his campaign by winning a silver medal in the 200m Individual Medley event. He followed it up with bronze medals in 100m butterfly, 100m breaststroke, 100m backstroke, and the 50m freestyle.

Finally, Sharath, along with teammates Prasanta Karmakar, Swapnil Patil and Niranjan Mukundan, won another bronze medal in the 4x100m Medley Relay. Sharath's unique feat saw him win medals on all days of the competition.

An excited Sharath said, "I'm extremely happy about my performance at the Games. For the past six months, I, along with the other swimmers have trained hard for this competition, and it feels great when our hard work pays off.

"I would like to thank my parents for their constant support, John (Christopher) sir for years of guidance and encouragement, GoSports Foundation for their support, and all others who have helped me so far, including Speedo, and my fellow swimmers at the pool."

"I'm also delighted with the performance of Niranjan Mukundan, who was part of the medal winning relay team, and finished 4th in the 200m IM. Both Sharath and Niranjan have been very committed and we have trained sincerely for the Asian Games. I'm happy that we have the results to show for our efforts," his coach said.

Comments
Topics mentioned in this article
Swimming Rahul Dravid
Get the latest Cricket news, check out the India cricket schedule, Cricket live score . Like us on Facebook or follow us on Twitter for more sports updates. You can also download the NDTV Cricket app for Android or iOS.