Teenager Adam Peaty won two golds and a silver for England at the recently concluded Commonwealth Games in Glasgow. 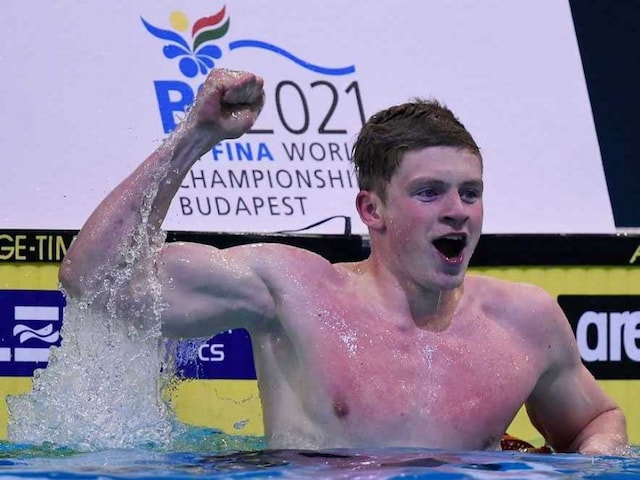 Great Britain's Adam Peaty set a new world record of 26.62sec in the 50m breaststroke at the European Championships before revealing he hated swimming when he was a child.

The 19-year-old took 0.05sec off Cameron van der Burgh's world record from the 2009 World Championships when the performance-enhancing supersuits era was at its peak.

It is a far cry from the little boy who was so scared of water he would not go in the bath or the shower.

As for swimming, he admitted: "I hated the pool."

He overcame his fears and the last weeks have been a fairytale -- although a well-deserved one -- for the Englishman who claimed two golds and one silver medal at the Commonwealth Games in Glasgow.

His coach Mel Marshall -- winner of world, European and Commonwealth medals -- gave him four days off after his exertions in Scotland.

But Peaty texted her asking if he could return to training early in order to prepare for the Europeans.

He came to Berlin where he won the 100m breaststroke and was part of the Great Britain mixed medley relay squad that set a new world record on the same evening on Friday.

His world record came in the second semi-final prompting a look of disbelief from the teenager who sat on the lane rope blinking as he absorbed the information on the scoreboard.

However, he knows he still has hard work to do on Saturday with the final to come.

He said: "I feel absolutely amazing. I had to look at that scoreboard about five times before I knew I had broken it.

"I haven't got any words for it. I haven't broken a world record before so I don't know how it feels.

Peaty's record overshadowed the rest of the night which had provided some quality racing.

Florent Manaudou became the first European this year to dip under the 48-second mark as he won the 100m freestyle, his third title of the meet.

Only world champion James Magnussen and Commonwealth silver medallist Cameron McEvoy -- both Australian -- had dipped under 48 seconds this year before Friday.

Jeanette Ottesen upset Sarah Sjostrom's hopes of a third individual title when she held off the Swede in the 100m butterfly.

Sjostrom had already won the 50m butterfly and 100m freestyle as well as relay silver and gold.

The Dane, however, was too strong, stamping herself on the race from the first stroke and she was in no mood to let go, staving off Sjostrom in a championship record of 56.51.

Rikke Moeller Pedersen completed the breaststroke double by adding the 200m to the 100m title she won on Wednesday.

The Dane was the clear favourite going into the final and she was 0.06sec under world record pace at the final turn before tiring in the last metres, her time of 2min 19.84sec a championship record and 0.73sec off her own mark from the world Championships last year.

Gregorio Paltrinieri confirmed his place in the elite of distance swimming after claiming his second title of the week with victory in the 800m freestyle.

Paltrinieri had propelled himself into the upper echelons with victory in the 1500m freestyle on Wednesday.

On Friday, he won the 800m in a championship record 7min 44.98sec, 3.51sec ahead of Pal Joensen of the Faroes Island with fellow Italian Gabriele Detti picking up his second bronze medal of the week.