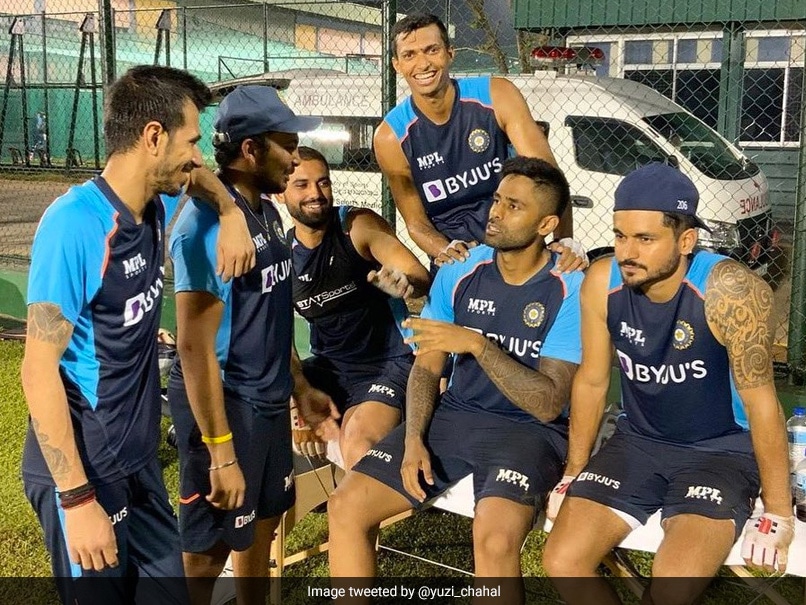 Indian players are enjoying their stay in Sri Lanka ahead of their white-ball series against the island nation and leg-spinner Yuzvendra Chahal's latest post on Twitter is proof of that. On Friday, the star Royal Challengers Bangalore (RCB) bowler posted a snap with the Indian squad and captioned it "Gossip time." In the photograph, the players could be seen having a very serious discussion. From the look on his face, it seems India's Mumbai Indians (MI) batsman Suryakumar Yadav is narrating an interesting story. While Navdeep Saini smiles for the camera, Manish Pandey has a serious expression on his face. On the other hand, the other three players in the picture - Chahal, Prithvi Shaw and Deepak Chahar - could be seen enthralled by Suryakumar's storytelling.

The snap also grabbed the attention of the Indian fans as they tried to guess the topic of their discussion.

"Suryakumar Yadav telling everyone how he had a staring session with Virat Kohli in the last IPL. In conclusion, I was victorious," wrote a user on the post.

In the comment, the user is hinting towards the on-field altercation between Kohli and Suryakumar that took place during an Indian Premier League (IPL) match between Mumbai Indians (MI) and RCB in 2020.

Suryakumar Yadav telling everyone how he had a staring session with Virat Kohli in the last IPL. In conclusion, I was victorious.

"On who is tested positive in the Indian team in England," the comment said.

On who is tested positive in indian team in England

"Meanwhile, Manish Pandey is missing his girlfriend," read another comment on the post. The user also added a frowning face emoji.

"Sir Navdeep, he is sitting at a length, which he bowls often to trouble batsmen," wrote a cricket enthusiast.

Sir Navdeep
He is sitting at a length , which he bowls often to trouble batsmen

Team India's six-match long tour of Sri Lanka is slated to kick off on Sunday, July 18. The first ODI match will be played at Premadasa Stadium in Colombo.

Yuzvendra Chahal Deepak Chahar Prithvi Shaw Suryakumar Yadav Sri Lanka vs India, 2021 Cricket
Get the latest updates on T20 World Cup, check out the T20 World Cup Schedule and Live Score . Like us on Facebook or follow us on Twitter for more sports updates. You can also download the NDTV Cricket app for Android or iOS.