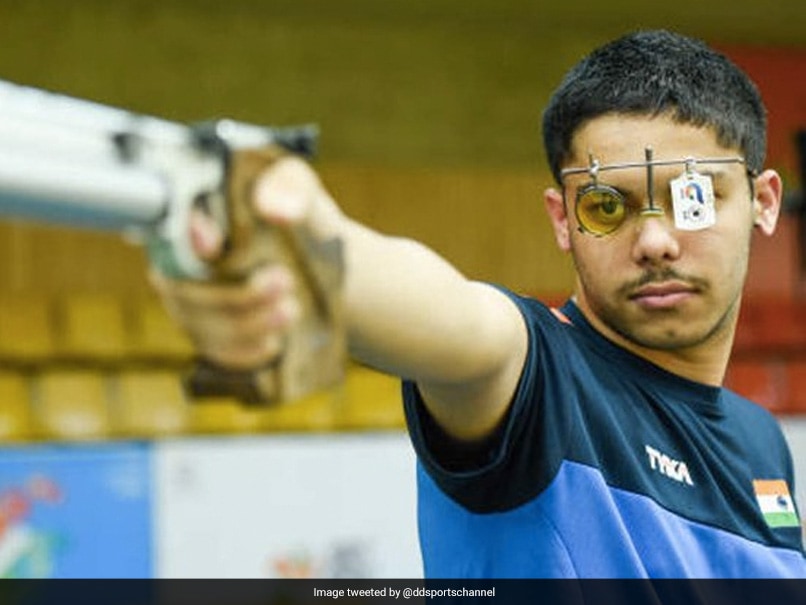 India's Vijayveer Sidhu managed only only hit in the shoot-off and won the silver medal.© Twitter

India's Vijayveer Sidhu won the silver medal behind Estonia's Peeter Olesk in the men's 25m rapid fire pistol final of the ISSF World Cup in New Delhi on Friday. With 26 hits each, both were tied for the top spot at the end of the 40-shot final. In the shoot-off, after having shot brilliantly to score four out of five hits in the eighth and final series, Vijayveer managed just one. Under no pressure, Olesk got four hits to win the top prize after a consistent showing though the finals.

The other Indian shooters in the final, Anish Bhanwalaand Gurpreet Singh occupied the fifth and sixth places, while Poland's Oskar Miliwek bagged the bronze with 20.

In Qualification 2, the seasoned Gurpreet was the best-placed Indian at third place with a total of 581, having shot 290 in the first stage and 291 in the second.

Anish was in fifth place with a total score of 579 and Sidhu too made the cut after managing to grab the sixth and final qualifying slot with an aggregate of 579 over the two stages.

Peru's Marko Carrillo topped the final qualifying with 582 and he was followed by Peeter Olesk of Estonia. Miliwek was in fourth place.