The men's team of Tarundeep Rai, Atanu Das and Pravin Jadhav put up a superlative show, posting a 5-3 win over Canada 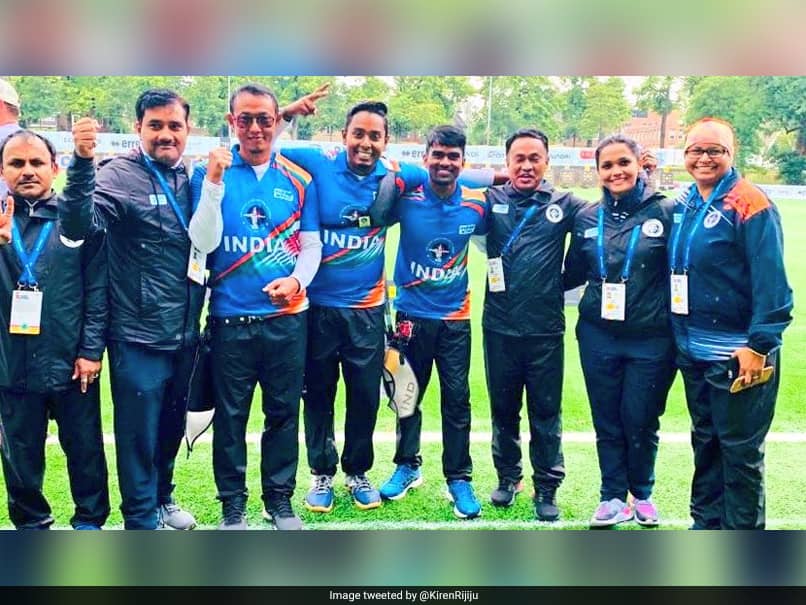 Indian men's recurve archery team secured the Olympic quota for the 2020 Tokyo Games by storming into the quarterfinals of the World Championships but there was heartbreak in store for the fancied women's side in Den Bosch, The Netherlands on Wednesday. The men's team of Tarundeep Rai, Atanu Das and Pravin Jadhav put up a superlative show, posting a 5-3 win over Canada to secure three-athlete quota for the first time since the 2012 London Olympics. At the 2016 Rio Olympics, India had an individual entry in Das, who had made a pre-quarterfinal exit.

"We finally made it. We are gelling well as a team and looking forward to Tokyo now. This is the moment to keep going for 2020," two-time Olympian Rai, a member of the London Olympics, said.

"I'm sure the opponents were feeling exactly the same pressure. So the key was to keep calm and it worked well for us," the 35-year-old Army archer said.

But it turned out to be a day of contrasting fortunes for the women's recurve team as senior archer Laishram Bombayla Devi misfired once, while Komalika Bari exposed her inexperience costing them the match 2-6 against lower-seeded Belarus.

The women's team will have a last chance in 2020 World Cup Stage III in Berlin where top three in the secondary tournament will grab the final Olympic quotas.

Blaming luck, the three-time Olympian Bombayla said: "In practice, I was shooting well but there was misfortune and something happened during the competition and I misfired. It could have been an easy win. We will try our best next time."

Bombayla's misfire meant India shot a poor 43 against Belarus' 52 in the first set. In the second set, Bombayla and Komalika shot 3 and 5 and it proved too much for Deepika Kumari, as they lost 44-52 to trail 0-4.

The trio finally came good in the third set winning it 53-51 to make it 4-2 but Karyna Kazlouskaya, Karyna Dziominskaya, Hanna Marusava sealed the issue 6-2 with a 53-51 win in the fourth set.

Indian team in the women's compound section, which is a non-Olympic category, entered the quarterfinals with a commanding 236-226 win over France.

Led by Muskan Kirar's outstanding display, India women's compound team (2099 points) finished third in the ranking round behind Colombia (2111) and Korea (2101) and advanced directly into the pre-quarters.

The 19-year-old from Jabalpur shot 54 perfect arrows which included 24 times X (closest to the centre) for an overall score of 701 points over the 72-arrow 50-metre ranking round. Having finished in the top-eight, Muskan Kirar got a bye into the round of 32 in the individual section.

29th seed Abhishek Verma, Bhagwan Das (35th) and Rajat Chauhan (88th) of men's, and Jyothi Surekha Vennam (17th) of women's advanced to the round three in the compound section.

India also remained in the medal fray in the compound mixed pair event where Verma and Muskan entered directly into last-16 with a top eight finish in the ranking round.

India face Germany in the compound mixed pair pre-quarterfinals. Compound men's team, who got a 14th place in the ranking, defeated their Spanish opponents 235-229 in the first round but only to end their campaign after losing to third seeded Turkey 234-238.

Up against a team who secured a bye into the last-16 after finishing sixth in the ranking round, the Indian trio of Rai, Das and Jadhav started off with three perfect shots including one X to take the first set with a one-point (56-55) lead in the men's recurve round two.

They held on to their momentum and scored one-point more than the first set with another perfect start in the second set where the trio hit two Xs and one 10 to edge out their opponents once again by one point (57-56) and race to a 4-0 lead.

Eric Peters, Crispin Duenas and Brian Maxwell, however, bounced back to grab the third set (58-54) hitting four perfect shots with two X to take the match to the decider.

Needing a tie, the Indians held their nerves and levelled the scores 57-all to seal the issue 5-3 and secure an Olympic berth.

Das, who was India's lone entry in the men's section, also sounded ecstatic and credited their strong start.

"We started off very well. I think this the best team we ever made. We worked so hard to get this point. We did not qualify in the last Olympics. So this is going to be a turning point for Indian archery," Das said.

The Indian team's preparation earlier this year was marred by infighting in the national federation which is staring at suspension from World Archery for electing two parallel bodies.

Internal wrangling by two faction groups had led the archers to pull out of the World Cup Stage I in Medellin under bizarre circumstances of missing their connecting flight.

To make up for the loss, the BVP Rao-led group had organised the acclimatisation camp for the recurve archers in Breda, The Netherlands.

The eight quarterfinalists win full three-athlete quotas. And the top four individual athletes from nations not qualified in the team event collect a single berth for their respective countries.