Among the record 567 athletes will be 30 neutral competitors from Russia, which remains suspended by the IPC over a mass doping scandal. 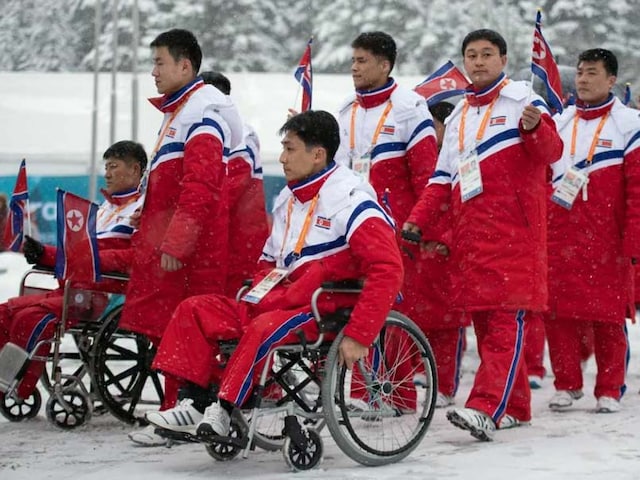 It proved to be the trigger for a series of conciliatory steps between the two Koreas, who remain technically a war, culminating in Thursday's announcement at the White House.

North Korea's first Winter Paralympians will not appear alongside South Korea's team, as happened at the Winter Olympics opening ceremony, after a row over the blue-and-white Korean unification flag.

North Korea pulled out of the joint march after South Korea decided to remove islands claimed by Japan from the flag, which depicts the Korean peninsula.

But the disagreement is considered a minor sticking point after what has been a swift thaw between the neighbours, starting with North Korea's decision in January to participate in the Olympics.

"The participation of North Korea and the two cross-country skiers is extremely significant and sends out a strong message of peace through sport," said International Paralympic Committee (IPC) president Andrew Parsons this week.

It is quite a turnaround from last year, when Pyongyang tested missiles that could reach the US mainland and detonated what it said was an H-bomb, sparking fury from Trump who threatened to "completely destroy" the North.

Also among the record 567 athletes will be 30 neutral competitors from Russia, which remains suspended by the IPC over a mass doping scandal.

Parsons has defended the decision to allow Russians to take part -- they were banned entirely at the Rio 2016 Paralympics -- insisting those competing are "as clean as any others" at the Games.

Some of the adapted sports have become hits with spectators, such as fast and furious para ice hockey where competitors slide around on double-bladed sledges.

As well as North Korea, Georgia and Tajikistan are also taking part for the first time.

Paralympians are an eclectic bunch, ranging from a 61-year-old Japanese ice hockey goaltender to a Mexican who found unlikely success as mono-skier.

American snowboarder Brenna Huckaby, who lost her right leg below the knee, made headlines when she featured in Sports Illustrated's swimsuit issue.