Ranveer Singh shared a picture from younger days of him posing in front of a poster of the "Immortal" Hulk Hogan. 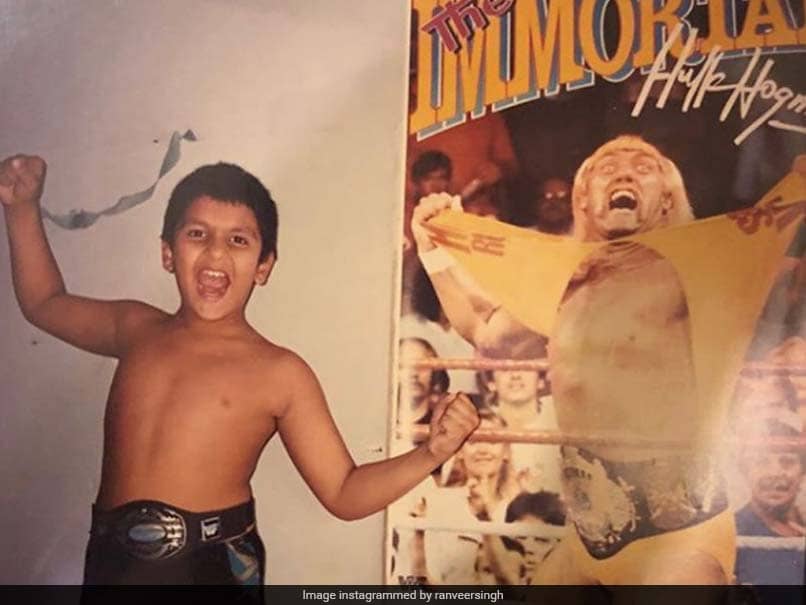 Bollywood actor Ranveer Singh took to Instagram to share a throwback picture of him posing next to a poster of WWE legend Hulk Hogan. The poster shows Hulk Hogan ripping his shirt in his iconic style and a young Ranveer Singh is seen standing shirtless next to the poster, wearing a cummerbund with his arms out in a classic wrestling pose. "Whatcha gonna do, when Hulkamania runs wild on you!" he captioned the picture. "#mondayfeeling throw it way back to when #WWF was life. had a poster on my wall of The Immortal @hulkhogan," he added.

"Whatcha gonna do, when Hulkamania runs wild on you!" #mondayfeeling throw it way back to when #WWF was life had a poster on my wall of The Immortal @hulkhogan

The post immediately drew the attention of fellow Bollywood stars, who were reminded of their own love for WWE.

"Hahahahahaha i can hear the music and the crowd!!" commented "Mirzapur" star Ali Fazal.

"Ultimate warrior for me all the way," wrote Sikander Kher.

"Legend. Was also a fan of the Ultimate Warrior," wrote Lloyd Stevens, who is Ranveer Singh's trainer.

Ranveer's throwback pic also drew a response from the official account of Premier League for India.

Ranveer Singh is a sports enthusiast, and on Sunday was busy dropping excited comments during an Instagram live chat between India's cricket and football team captains Virat Kohli and Sunil Chhetri.

The actor will also play the role of Kapil Dev in the upcoming movie "'83", which aims to retell the story of India's first World Cup win.

Comments
Topics mentioned in this article
Get the latest updates on IPL 2021, IPL Points Table , IPL Schedule 2021 , live score . Like us on Facebook or follow us on Twitter for more sports updates. You can also download the NDTV Cricket app for Android or iOS.