Bengaluru kept their attacking display on and led the contest 36-27 with five minutes to go. 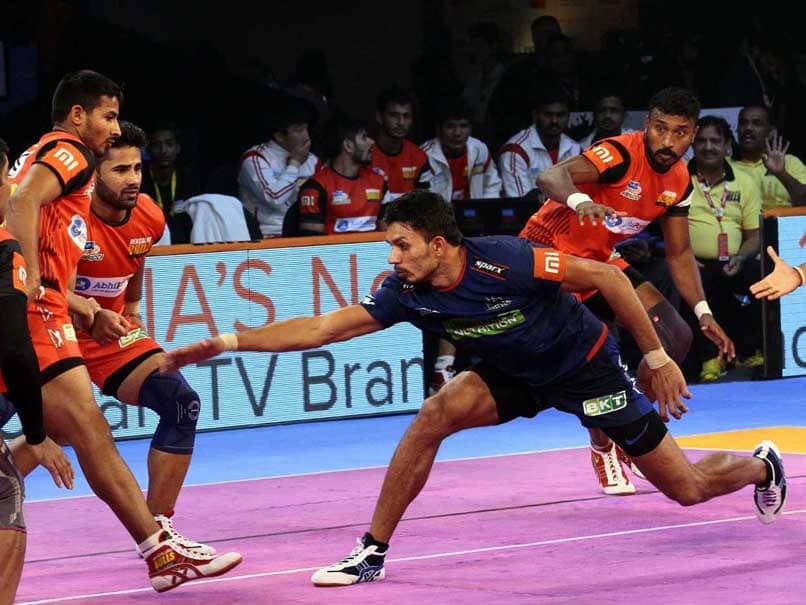 Bengaluru came back with a spirited show in the second half.© Pro Kabaddi League

Pawan Sehrawat's stunning 20-point raid helped Bengaluru Bulls outclass Haryana Steelers 42-34 in an inter-zonal challenge match of the Pro Kabaddi League (PKL) on Wednesday. Despite trailing in the first half, Bengaluru rode Pawan's stunning raids to make a comeback in the second half as the raider collected 13 crucial points in the later part of the game. Apart from Pawan, Bengaluru skipper Rohit Kumar chipped in with eight raid points.

For Haryana, raider Vikash Kandola and skipper Monu Gayat collected 14 and 11 points respectively. However, their combined effort was overshadowed by Pawan's extraordinary effort.

Haryana started with a 4-2 lead in the first four minutes before Rohit's fine raid and Jasmer Gulia's tackle points equalised the issue at 5-5 in the 6th minute. Pawan and Vikash kept on picking raid points for their respective teams as the contest was once again tied at 8-8 in the 10th minute.

Haryana took a slight 10-8 lead through successful raids by Vikash and Naveen before an unstoppable Pawan once again pulled things back to square things off at 10-10.

There was an equal raiding effort from both the sides in the last minutes of the first half but Haryana went with a slender 15-13 lead at the break.

Bengaluru came back with a spirited show in the second half, thanks to Pawan's scintillating show. Pawan's back to back raid points helped Bengaluru inflict an all out in the 24th minute as they took a 21-17 lead.

Pawan and Rohit's combined effort saw Bengaluru taking a massive 27-19 lead and they went on to inflict the second all-out as Haryana trailed 23-32 in the 32nd minute.

Bengaluru kept their attacking display on and led the contest 36-27 with five minutes to go.

In the other match of the day, UP Yoddha defeated Puneri Paltan 29-23.