Raider Vikas Kandola was once again the star for Haryana Steelers as they picked up an important 30-27 victory against a struggling U Mumba side. 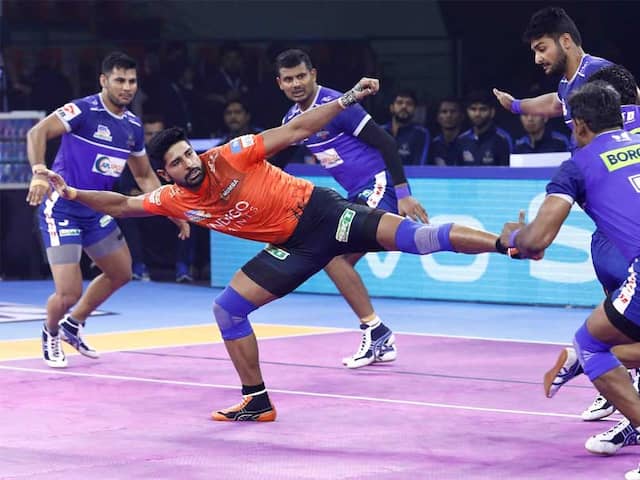 The close contest saw the U Mumba side match the Haryana Steelers till the end.© Pro Kabaddi League

Raider Vikas Kandola was once again the star for Haryana Steelers as they picked up an important 30-27 victory against a struggling U Mumba side in a Pro-Kabaddi League (PKL) match at the Jawaharlal Nehru Indoor Stadium here on Monday. The close contest saw the Mumbai side match the Steelers till the very end but Kandolas nine-point game and some uncharacteristic errors from the U Mumba defence finally led to a Haryana victory. Both sides went into the match with identical records (four wins and four losses in eight matches) but Haryana Steelers started on an aggressive note with coach Rakesh Kumar recognising the lack of raiding quality in U Mumba's ranks.

The defence kept a high line, strangling U Mumba's opportunities to pick up Bonus Points, thereby forcing them into mistakes, while Kandola picked up the points with his raids at the other end. His three-point Super Raid, 12 minutes into the match, set the tone for the Haryana side who inflicted an All-Out on U Mumba with three minutes remaining to half time.

The second half started with the scores at 16-8 but raider Abhishek Singh's introduction by U Mumba changed the dynamics of the match. His raid points and U Mumba's resolute defence reduced the gap to just two points 10 minutes into the half. Consecutive Super Tackles by Ravi Kumar and Chand Singh, along with a few errors in the Mumba defence quickly widened the gap to 25-17 in favour of Haryana with seven minutes to the final whistle.

Sandeep Narwal's raid for Mumbai with six minutes left on the clock, taking out Dharmaraj Cheralathan and Chand Singh, tilted the balance of the match once again and the subsequent all-out meant the gap was reduced to one point with less than three minutes remaining. But the surge came too late for Mumbai as they succumbed to another defeat.