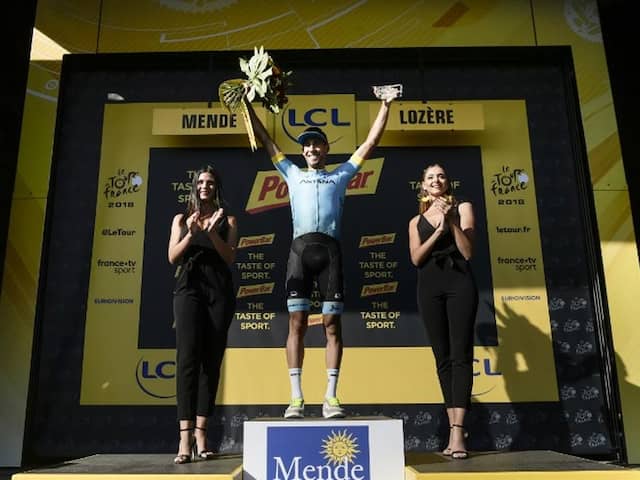 Spaniard Omar Fraile ended Belgian hopes of a Tour de France victory on their national holiday with a gutsy, maiden win on the race on the 14th stage Saturday. Britain's Geraint Thomas, of Team Sky, retained the race leader's yellow jersey after crossing the line with teammate Chris Froome and Dutch rival Tom Dumoulin (Sunweb) just over 18 minutes in arrears. Froome, the four-time champion, remains 1min 39sec behind with Dumoulin, arguably Team Sky's biggest threat over the final stages, at 1:50.

"I felt good today. Obviously it was tough, but it was pretty good," said Thomas. "I think we can be satisfied with our run."

With four days of climbing in the Pyrenees yet to decide the outcome of the yellow jersey, the main peloton and all the race favourites were happy to allow an early breakaway escape in the opening kilometres.

Intentions seemed clear on Belgium's national holiday after seven Belgians got in among a group of 32 frontrunners including Philippe Gilbert and yellow jersey holder Greg Van Avermaet.

But Astana rider Fraile, who claimed his maiden Giro d'Italia stage last year following a long breakaway, was intent on ruining their party.

"It was one of the stages I had marked and when I saw the breakaway go, I told myself that I had to get in it," he said.

"It's a dream. Soloing over the finish line was incredible.

"I think when a cyclist wins on the Tour de France it's fabulous. It's the most important race in the world."

When Jasper Stuyven (Trek) capitalised on a mid-race spat between Gilbert and Fraile to break away on his own with over 30km to race, it looked like Belgium would have reason to celebrate.

But Stuyven, a one-day classics specialist who finished in the top ten of Paris-Roubaix and the Tour of Flanders earlier this season, fell victim to his lack of climbing prowess.

He held a 1min 40sec lead on a group of chasers with 10km to race, with the main peloton and Thomas at over 20 minutes in arrears.

But on the final, 3km climb leading to the flat finish at Mende Fraile launched an audacious counter-attack.

"I knew Stuyven had spent a lot of energy attacking on the flat (section)," added Fraile.

"There was also a headwind, so once we got on the foot of the climb I decided to go for it. In the end, it went well."

The Spaniard dug deep on the climb, whose average gradient is a punishing 10.1 %, and soon had Stuyven in his sights.

When he overtook the Belgian with two kilometres to race, Fraile did not look back.

He came over the finish line with room to spare, finishing six seconds ahead of Frenchman Julian Alaphilippe (Quick Step), with Stuyven in third place.

"Afterwards you can always say it was too early, this and that, but it was a big group with some strong climbers, and I had to go before and not wait until they ripped it apart," said Stuyven.

The 15th stage on Sunday is a 181.5 km trek from Millau, site of the world-famous Millau viaduct, to the medieval town of Carcassonne.

It includes three categorised climbs, including the 12.3 km-long Pic de Nore, whose summit is 40 km from the downhill finish line.