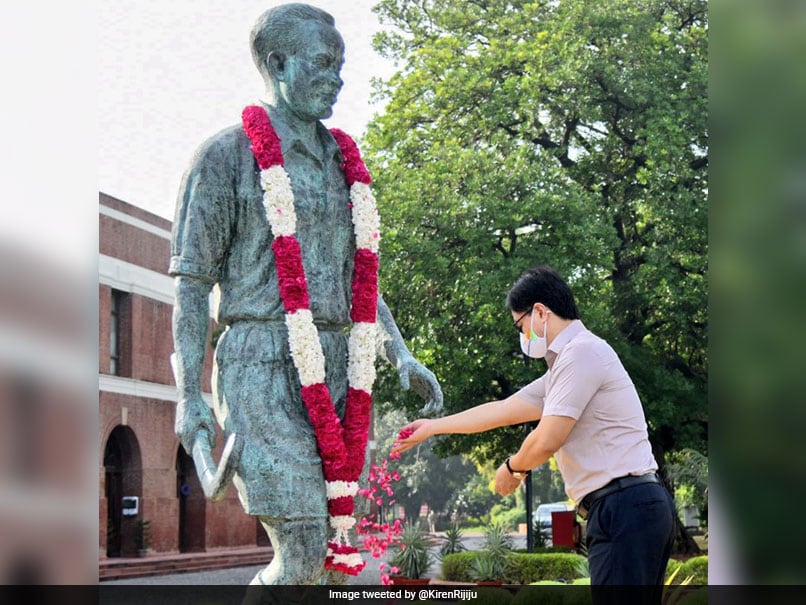 On the occasion of National Sports Day, Prime Minister Narendra Modi and Union Sports Minister Kiren Rijiju were among many who took to social media to pay their tribute to hockey legend Major Dhyan Chand on his 115th birth anniversary. In a series of tweets, PM Modi, apart from paying tribute to the hockey wizard, also highlighted the efforts the government is taking to popularise sports in the country and give opportunities to budding youngsters. "Today, on #NationalSportsDay, we pay tributes to Major Dhyan Chand, whose magic with the hockey stick can never be forgotten. This is also a day to laud the outstanding support given by the families, coaches and support staff towards the success of our talented athletes," PM Modi tweeted.

#NationalSportsDay is a day to celebrate the remarkable achievements of all those exemplary sportspersons who have represented India in various sports and made our nation proud. Their tenacity and determination are outstanding.

#NationalSportsDay is a day to celebrate the remarkable achievements of all those exemplary sportspersons who have represented India in various sports and made our nation proud. Their tenacity and determination are outstanding.

In another tweet, Kiren Rijiju shared a video on Major Dhyan Chand.

Today is #NationalSportsDay and I pay my tribute to the 'The Wizard of Indian Hockey' Major Dhyan Chand on his Birth Anniversary. The great sportsman displayed unparalleled dedication and skills in Hockey to bring accolades and honour to India ???????? #MajorDhyanChand pic.twitter.com/ByCzcUgS4Y

Every year the President gives away the National Sports Awards, including Rajiv Gandhi Khel Ratna Award, Arjuna Award, Dronacharya Award and Dhyanchand Award to athletes and coaches who did the country proud in various sports.

However, this year's award ceremony will not take place at the Rashtrapati Bhavan due to the coronavirus pandemic, instead athletes will receive their honours in a virtual award ceremony.

This year an unprecedented five sportspersons have been selected for the Rajiv Gandhi Khel Ratna Award-- the highest sporting honour in the country.

Cricketer Rohit Sharma, hockey player Rani Rampal and wrestler Vinesh Phogat are among five athletes who have been selected for the highest sporting honour.

Various politicians also paid tribute to the legend who led India to three Olympic medals in 1928, 1932 and 1936 and scored more than 400 goals in a career spanning over 22 years.

During the 1936 Berlin Olympic final, Dhyan Chand top-scored with three goals and the Indians won easily, defeating Germany 8-1. That match represented the pinnacle of India's hockey success; guided and inspired by Dhyan Chand, they made for a virtually invincible team.

Dhyan Chand contributed to the game even after his retirement. He was the chief coach at the National Institute of Sports in Patiala for a while and he also taught at many coaching camps in Rajasthan.