Zhang Weili trained in martial arts as a child but wasn't really sure where her life was headed - until the moment she saw Ronda Rousey become the UFC's first women's world champion in 2013. 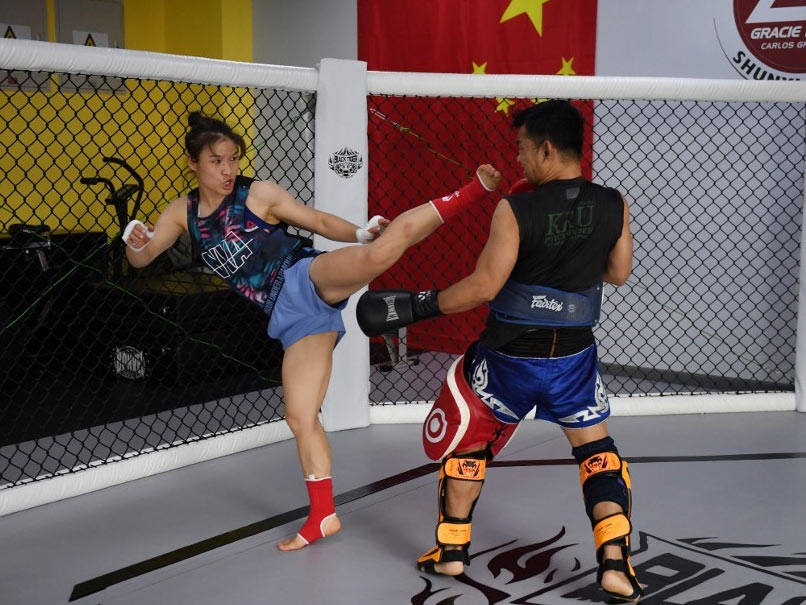 Zhang Weili steps out on Saturday as the first Chinese fighter to compete for a UFC title.© AFP

Zhang Weili steps out on Saturday as the first Chinese fighter to compete for a UFC title and with one person to thank for her remarkable rise in the sport: Ronda Rousey. "I just want to be like her," explained the 30-year-old Zhang. "She showed us all what is possible in this sport. She has the strength and power that we all wish we had." Zhang will on Saturday face the Brazilian strawweight title-holder Jessica Andrade as part of the UFC's Fight Night 157 event at the Universiade Sports Centre in the southern Chinese metropolis of Shenzhen.

Zhang trained in martial arts as a child but wasn't really sure where her life was headed -– until the moment she saw Ronda Rousey become the UFC's first women's world champion by defeating fellow American Liz Carmouche at bantamweight in 2013.

"Right then was when I decided I wanted to be an MMA fighter," Zhang explained.

Zhang had resisted her parents' suggestion that she become a hairdresser and had been dabbling in MMA while jumping between part-time jobs in the hospitality industry before she saw that Rousey fight. Since then her whole life has been MMA.

For her part, Rousey has taken to Instagram over the past week to declare she felt like a "proud mama" watching how Zhang –- and women's MMA -- had grown.

"Women from all walks of life, from all over the world are rising to the challenge and showing the world what it means to fight like a girl. Weili Zhang is a prime example of overcoming adversity —- fighting not just through the ranks, but to also get noticed and stand out," posted Rousey.

Zhang said it had been an honour to see those words written by her "idol and role model".

The Zhang-Andrade bout is the third time this year that female fighters have topped the card at an event staged by the world's biggest mixed martial arts organisation, with one more on the horizon before the end of 2019.

Parity between the sexes in sport has been a simmering issue for decades that was brought to the boil during this year's FIFA Women's World Cup, and a very public campaign led by American captain Megan Rapinoe as she led her nation to victory. The American team are still locked in an equal-pay lawsuit with the governing USA Soccer body.

While pay rates in MMA are not revealed, the likes of "Fight of the Night" bonuses are equal across the board and the sport has been quick to place female fighters front and centre in promotional terms at least.

And credit for that can be traced back to Rousey.

The former Olympian proved a marketing dream for the UFC, quickly appearing on talk shows around the world and moving into movies, with cameo appearances in the likes of the billion-dollar Fast and Furious franchise.

Rousey –- now retired from MMA and plying her trade in professional wrestling –- is worth an estimated USD 12 million, according to the annual Forbes sports rich list.

"She showed that, 'Hey, I can make as much as the boys'," said Kevin Chang, the UFC's senior vice-president, Asia Pacific. "We're one of the few sports where there is parity, where women headline cards. It's hugely important to us that this happens and it's what MMA fans want.

"MMA treats each athlete as an individual. You come and you perform, then you get paid to level of your performance."

Zhang has had a rapid rise to the ranking of number six in the UFC's strawweight division thanks to a 3-0 run with the organisation, after being signed at the end of 2017 from the Chinese domestic leagues.

Crunch time comes Saturday. Andrade has six years' experience in the UFC and comes off a stunning first-round title victory over the then-champ, American Rose "Thug" Namajunas, last time she fought in May.

Zhang is aware of the task ahead but said she hopes that –- like Rousey before her -– she hopes she can show "what's possible".

"I feel like I have been working towards this moment for years now," said Zhang. "If watching me and what I do can motivate girls, and give them the power to chase their dreams, then this would be my major achievement, that would be super-positive."