India's Pramod Bhagat and his partner Palak Kohli qualified for the mixed doubles semifinals, while three singles players also made the last-four stage to continue a rampaging run at the Paralympics badminton competition on Friday. 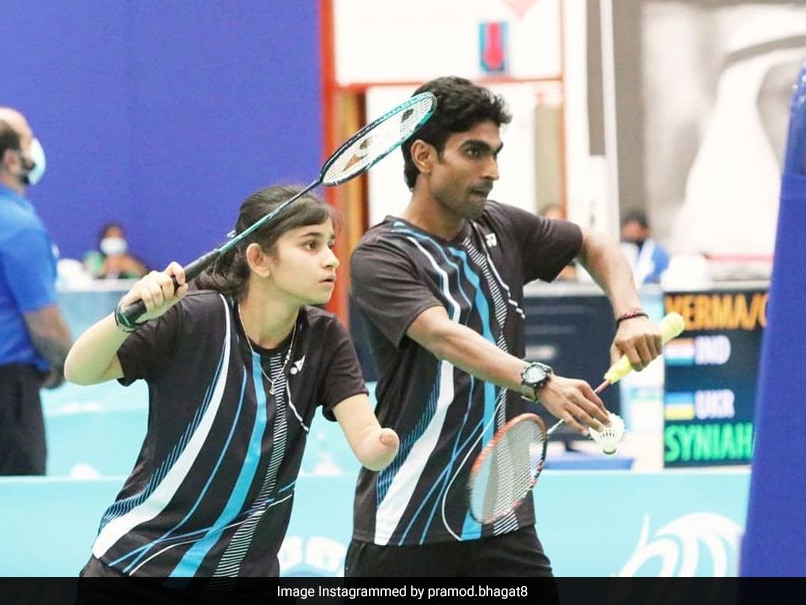 India's Pramod Bhagat and his partner Palak Kohli qualified for the mixed doubles semifinals, while three singles players, including Noida District Magistrate Suhas Yathiraj, also made the last-four stage to continue a rampaging run at the Paralympics badminton competition on Friday. Bhagat, who had qualified for the men's singles SL3 event on Thursday, and Kohli beat Thailand's Siripong teamarrom and Nipada Saensupa 21-15 21-19 in a 29-minute clash to finish second in group B.

The Indian duo will clash with Indonesian pair of Hary Susanto and Leani Ratri in the semifinals on Saturday.

In men's singles, Suhas, Tarun Dhillon and Manoj Sarkar also made it to the semifinals on a fruitful day for India.

However, Suhas suffered a 15-21 17-21 loss against France's top seed Lucas Mazur and Tarun went down 19-21 9-21 to Indonesia's Fredy Setiawan in their final group matches later in the day.

In the semifinals, Suhas has been pitted against Setiawan, while Tarun will lock horns with Mazur, a two-time world champion.

Suhas has an impairment in one of his ankles, while Tarun has restricted knee movement following a severe injury that he suffered at the age of eight.

In SL3 class, Manoj secured a 21-16 21-9 victory over Ukraine's Oleksandr Chyrkov to make it to the knockout stage after finishing at the second spot in group A behind world no.1 Bhagat.

The 31-year-old, who had contracted polio at one, had lost to Bhagat in his opening match.

In the semifinals, Manoj will face Great Britain's Daniel Bethell, while Bhagat will take on Japan's Daisuke Fujihara on Saturday.

In SH6 class, Krishna Nagar, seeded second, prevailed 21-17 21-14 over Brazil's Vitor Goncalves Tavares in 27 minutes for his second win in as many matches to top group B.

Krishna, who qualified for the semifinals, will meet Great Britain's Krysten Coombs in the knockout stage.

Young Kohli, however, signed off her women's singles SU5 campaign with a 11-21 15-21 loss against Japan's Kaede Kameyama in the quarterfinals.

Earlier, Kohli, 19, and Parul Parmar, 48, suffered their second successive loss in women's doubles SL3-SU5 group A, going down 12-21 20-22 to the French pair of Lenaig Morin and Faustine Noel.

After his mixed doubles win, Bhagat said: "This was a difficult game and I am happy to be on the winning side, Palak and me were focused and managed to execute our plans.

"I find myself very lucky to have qualified for 2 semifinals. All my focus now is winning medals for India."

Comments
Topics mentioned in this article
Badminton Olympics 2020 India
Get the latest updates on T20 World Cup, check out the T20 World Cup Schedule and Live Score . Like us on Facebook or follow us on Twitter for more sports updates. You can also download the NDTV Cricket app for Android or iOS.