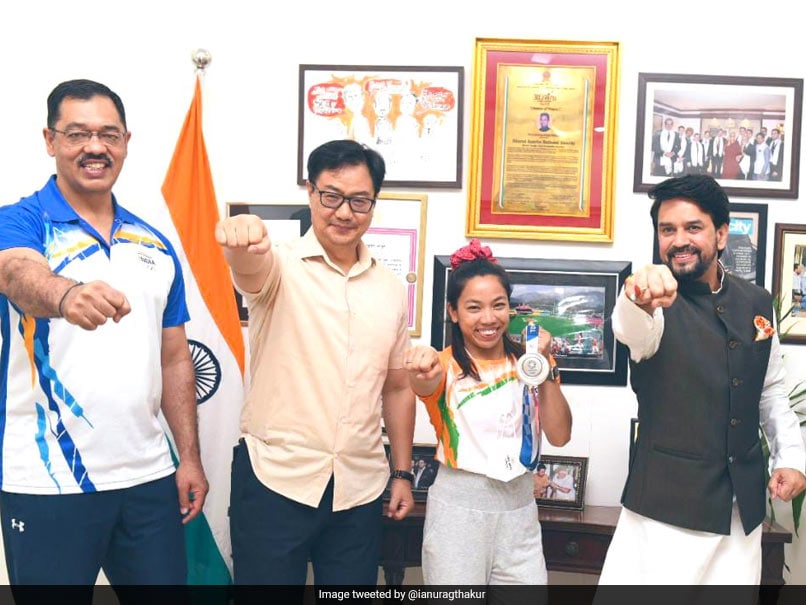 Sports Minister Anurag Thakur on Monday hailed weightlifter Mirabai Chanu for creating history by winning a first day medal at the Tokyo Olympics, an unparalleled feat by an Indian athlete in the history of the games. "First day, first medal, nobody did it. You brought smiles in the faces of 135 crore Indians and the entire nation is proud of you," Thakur said during a felicitation ceremony of the diminutive weightlifter and her coach Vijay Sharma at his residence in New Delhi.

Chanu, who returned to the country on Monday evening, lifted a total of 202kg (87kg+115kg) in the 49kg category to better Karnam Malleswari's bronze in the 2000 Sydney Olympics on Saturday.

With that performance, she exorcised the ghosts of the 2016 Games where she had failed to log a single legitimate lift, leaving her shattered. "You made history. It's a big achievement," Thakur added.

"Her (Chanu's) success also shows how the TOPS (Target Olympic Podium Scheme) program has played a crucial role in boosting the development of our athletes and India's medal hopes," the sports minister said.

He added that Chanu's success will inspire a generation of athletes, especially from the north-eastern region of the country.

Chanu dedicated her medal to the entire nation, had it not been for the support of the government her dream would have remained unfulfilled.

"This is a dream come true for me. I have been training for this moment for years and I am glad that it came right for me at the biggest stage of them all, the Olympic Games," she said.

"I dedicate the medal to the entire nation who stood by me and supported me in my trying times."

"The trip to USA last year to address issues related to my shoulder was instrumental in my journey to this medal. I am grateful to the Government of India for all the support without which this journey to an Olympic medal wouldn't have been possible," she added.

Comments
Topics mentioned in this article
Mirabai Chanu Olympics 2020 India Weightlifting
Get the latest updates on ICC Women's Cricket World Cup 2022 and IPL 2022, check out the Schedule , Live Score and IPL Points Table. Like us on Facebook or follow us on Twitter for more sports updates. You can also download the NDTV Cricket app for Android or iOS.