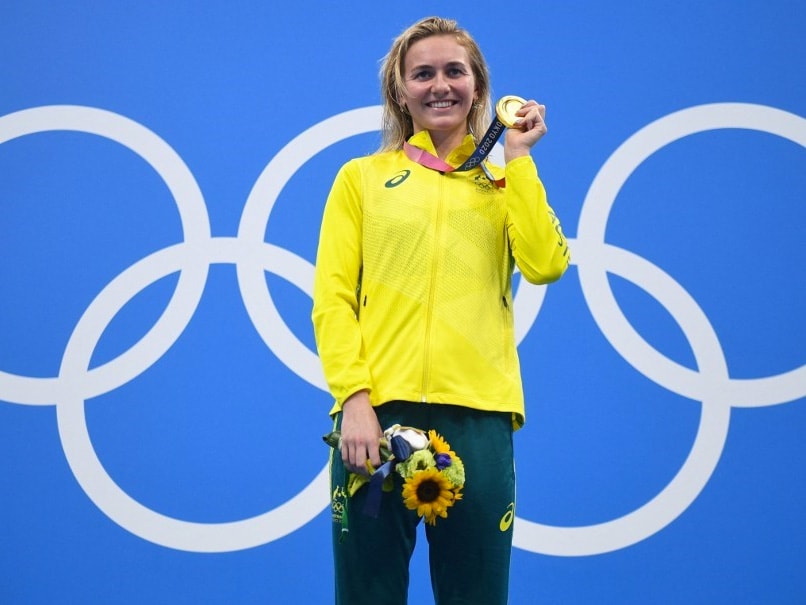 Ariarne Titmus toppled decorated American great Katie Ledecky to clinch the 400m freestyle gold medal on Monday at the Tokyo Games as untouchable breaststroke king Adam Peaty became the first British swimmer to successfully retain an Olympic title. Ledecky came to Japan on the back of winning four gold and a silver at Rio in 2016, but Titmus has been snapping at her heels, ousting her as world champion in 2019 and topping the timesheets this season. And when it came to the crunch at the Tokyo Aquatics Center, it was the Australian who prevailed, hitting the wall in 3mins 56.69secs, the second fastest ever swum.

Only Ledecky has gone better, when she set the 3:56.46 world record at the Rio Olympics.

She had to settle for silver this time in 3:57.36 with China's Li Bingjie a distant third.

"I tried to stay as composed as I could and use the speed that I have," said an ecstatic Titmus. "To pull it off in the backend against someone who has an amazing second half of her race, I'm really proud of that."

It was always going to be a two-horse race with Ledecky and Titmus the only women to have gone under four minutes since Rio.

The pair came together smiling and put their arms around each other as they left the pool and Ledecky paid tribute to her rival.

"We're really friendly and she said she couldn't have done it without me," she said.

"I could say the same about her, she's really pushed me. I think it's great for the sport overall."

Ledecky is attempting a gruelling programme in Japan -- also swimming the 200m, 800m and 1500m, which has been added to the Olympics for women this year.

Known as 'The Terminator', Titmus will be a major threat in two of them, clocking the second-fastest time in history over 200m last month while setting a new personal best in the 800m.

Peaty, arguably the best 100m breaststroke ever, was also on fire.

After setting sub-58 second times in the heats and semi-finals, he ramped it up a notch to successfully defend his crown, powering home in 57.37, the fifth fastest of all-time.

He turned in 26.73 and was never threatened with Dutchman Arno Kamminga, the only other swimmer besides Peaty to ever go under 58, taking silver with Italy's Nicolo Martinenghi third.

"It means the world to be me," Peaty, who has lowered the world record five times and has been the world's top performer every year since Rio, told the BBC.

Meanwhile, the reign of Swedish defending champion and world record holder Sarah Sjostrom was brought to a halt in the women's 100m butterfly by Maggie MacNeil.

The Canadian world champion delivered a stunning burst of speed over the final 50m to touch in 55.59 secs, the third fastest in history to edge China's Zhang Yufei (55.64) into second.

"I can't believe it," said MacNeil. "I couldn't see anyone, I was in the outside lane which I think worked to my advantage."

US superstar Caeleb Dressel made his Tokyo bow with a scintillating opening leg of the 4x100m freestyle relay to lead his team to gold in what could be a Michael Phelps-style medal haul for him in Japan.

Dressel, whose 13 world titles have prompted inevitable comparisons with Phelps -- winner of eight golds in 2008 and 23 in total -- is targeting seven titles.

Comments
Topics mentioned in this article
Olympics 2020 Swimming Olympics
Get the latest updates on ICC T20 Worldcup 2022 and CWG 2022 check out the Schedule, Live Score and Medals Tally. Like us on Facebook or follow us on Twitter for more sports updates. You can also download the NDTV Cricket app for Android or iOS.