Jamaican sprinter Hansle Parchment showed his gratitude to a Tokyo Olympics volunteer who came to his help after he reached the wrong venue. 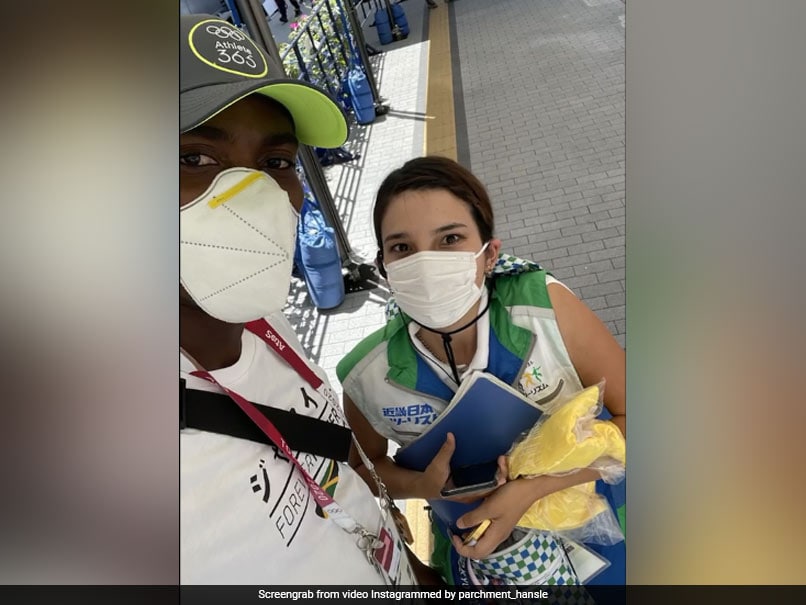 Hansle Parchment with the Tokyo Olympics volunteer who helped him reach the venue on time.© Instagram

Tokyo Olympicsgold medallist Hansle Parchment won the men's 110m hurdle race with a season best timing of 13.04 seconds on August 5. But all that might not have been possible, if it wasn't for a volunteer who came to his aid. The Jamaican athlete posted a video on Instagram, describing how he nearly missed the event after boarding the wrong bus and ended up at one of the aquatics stadiums. However, destiny had something else in store for Parchment as a Tokyo Games volunteer gave him money for a taxi and pointed him in the right direction. Not only did the Jamaican sprinter compete, he managed to win the gold medal.

"The Japanese people are the sweetest ever. Thank you my friend @d_treefairy," Parchment captioned the video.

In the video, the 31-year-old said he wasn't familiar with the surroundings and only realised that he had boarded the wrong bus when it took a wrong turn.

"I accidentally went on the wrong bus to the wrong venue. I had music in my ears, and I wasn't hearing anything the people on the bus were saying. I saw the sign at bus saying athletics track. So, I just went on and didn't think about it. I was in my phone, listening to music. By the time I looked up, I realised no.. this bus is going the wrong way. I wasn't familiar with any of these surroundings," Parchment said.

The Jamaican sprinter was asked to go back to the Olympic village and take another bus to the stadium. If he had done that, Parchment said he would have missed his event.

"I saw this volunteer and I had to beg, because of course she is not allowed to do much. She actually gave me some money to take one of the taxis."

"That's how I was able to get to the warm-up track at the stadium, with enough time to warm up and compete, that's just awesome," he added.

Hansle Parchment found the volunteer who helped him win the Olympic gold. The sprinter not only let her hold his medal but gifted her a t-shirt while also returning the money she had given to him for the taxi.

Comments
Topics mentioned in this article
Athletics Olympics 2020 Olympics
Get the latest updates on ICC T20 Worldcup 2022 and CWG 2022 check out the Schedule, Live Score and Medals Tally. Like us on Facebook or follow us on Twitter for more sports updates. You can also download the NDTV Cricket app for Android or iOS.