Ashok agonisingly missed out on a medal at the Tokyo Olympics after finishing only two strokes behind gold medallist and World No. 1 Nelly Korda of the US. 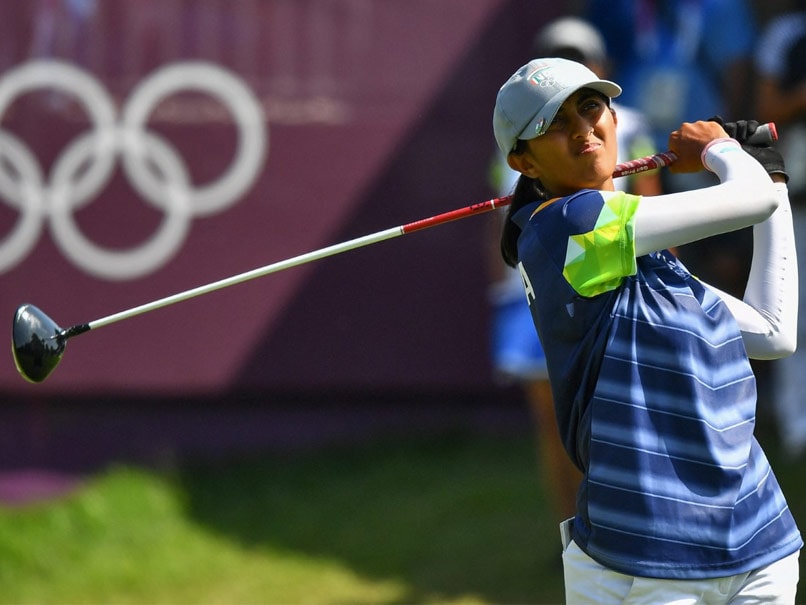 Aditi Ashok finished at 15-under 269 in women's individual stroke play at the Tokyo Olympics.© AFP

Aditi Ashok was all of 18 years of age when she made her Olympic debut at the Rio Games in 2016, the same year she became the first Indian to win a Ladies European Tour title by winning the Hero Indian Women's Open. As the youngest golfer in the Games' history, she started off with two rounds of 68 each before struggling in the next two rounds to finish a distant 41st. This time at the Tokyo Olympics, the 23-year-old Ashok showed that she had come of age, as she put in an impressive display of golf to finish 15-under 269 in women's individual stroke play at the Kasumigaseki Country Club on Saturday.

Ashok agonisingly missed out on a medal after finishing only two strokes behind gold medallist and World No. 1 Nelly Korda of the US.

Japan's Mone Inami and New Zealand's Lydia Ko, who won silver and bronze, respectively after a play-off for second place, finished only a stroke ahead of Ashok.

Having been in medal position in the opening three rounds, Ashok's near-miss was a heartbreaking end to a phenomenal underdog story for the World No. 200 player who was seen as a rank outsider for a medal in Tokyo.

In the end, it was a Cinderella story not to be but Ashok's fourth-place finish was nothing short of stunning. Her performance over the last four days inspired many back home in India to stay glued to their television sets in the early hours of the day despite golf being nowhere near among the most followed sports in the country.

"I think no matter how I finish this week, (Indian) people have heard about golf," Ashok was quoted as saying by news agency AFP after Friday's third round.

"They continue to tune in and have extended the golf coverage in India because I'm in the top three. I think that's good itself -- people seeing golf instead of the other sports. It's always good to get more people aware of the game," she said.

Ashok, who first played on the LPGA Tour in 2017, had shown signs of what was to come in Tokyo last month when she combined with Thailand's Pajaree Anannarukarn at the LPGA Great Lakes Bay Invitational in Los Angeles to finish tied-third with a score of 19-under 261.

With her tied-22nd place at the Women's British Open in 2018 being her best performance at a Major so far, the Arjuna Award-winning Ashok will now look to build on her Tokyo showing.

"This year has been kind of the best I've had with my short game, my putting, the rest of my game has been fantastic," said Ashok. "I think it's been one of the best years."

Comments
Topics mentioned in this article
Olympics 2020 India Golf Aditi Ashok Olympics
Get the latest updates on IND vs NZ 2021, check out the Schedule and Live Score . Like us on Facebook or follow us on Twitter for more sports updates. You can also download the NDTV Cricket app for Android or iOS.