National record holder and Asian champion Tintu Luka clocked a moderate 2:01.84 to defend her title and better the 18-year-old meet mark of 2:02.28 set by Jyotirmoyee Sikdar. 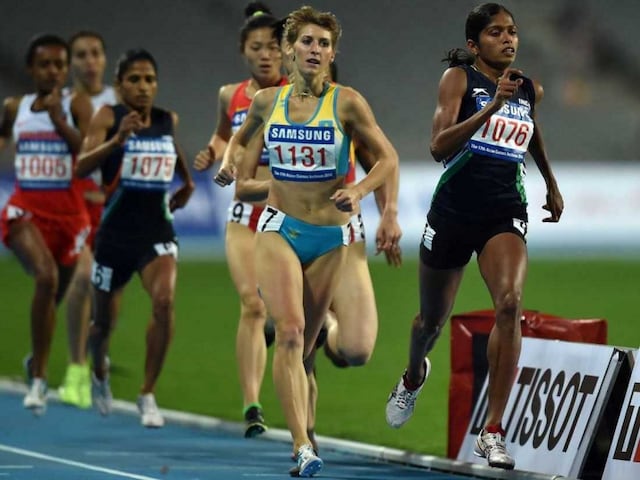 Rio-Olympics bound Tintu Luka grabbed the spotlight as she won the gold in women's 800m race on an uneventful third and final day of the Federation Cup National Athletics Championships in New Delhi on Saturday.

Gomathi Marimuthu of Tamil Nadu was a distant second with a time of 2:06.45 while Shipra Sarkar of West Bengal took the bronze in 2:06.95.

None of the athletes could qualify for the Olympics today after Sudha Singh made the lone Rio Games cut yesterday in women's 3000m steeplechase. There was also no national record today either after two each on the first and second days of the championships.

An unfortunate incident occurred in women's triple jump and national record holder Mayookha Johny got injured while making her first attempt. Mayookha, who was eyeing a Rio qualification mark, hurt her left ankle as she lost control and landed awkwardly on the sand pit.

She was forced to quit the competition and rushed for medical examination. Coach Bedros Bedrosian confirmed that "there was no fracture, but we are waiting for the medical expert's advice". On official said that she had locked her left ankle while taking the jump.

In the most anticipated event of the day, Odisha sprinter Srabani Nanda (23.39 secs) pipped state-mate Dutee Chand (23.41s) as in the last edition in Mangaluru. However, both the athletes returned slower timings than what they clocked in yesterday's heats and they will have to wait for another chance to make the Rio Olympics standard of 23.20secs.

Dutte had yesterday set a national record in women's 100m dash, clocking 11.33secs and missed the Rio Olympics qualification mark of 11.32secs by one-hundredth of a second. Srabani was second in the 100m dash yesterday.

The men's triple jump event was a mediocre affair with the winner Renjith Maheswari coming up with a best effort of 16.47m. Services jumper Arivu Selvam, who just returned from a short training-cum-competition stint in South Africa, took the silver with 16.00m, just 1 cm ahead of national record holder Arpinder Singh (15.99m) who had three consecutive victories in Federation Cup from 2013 to 2015.

Arpinder, who had a training stint in United Kingdom, with funding under the government's Target Olympic Podium Scheme, had four of his jumps turned out to be invalid.

Delhi's Beant Singh finished fourth in 1:48.51, the world leading in youth (Under 18) category.

In the morning session, Maharashtra's Swati Gadhave eclipsed the meet record in women's 10,000m by clocking 32:53.73 and in that process became the fourth Indian athlete ever to run the distance under 33 minutes.

G Lakshmanan of Tamil Nadu made a distance-double by adding the men's 10,000m gold today to his earlier win in 5,000m.

Incheon Asiad bronze medalist Annu Rani improved her own meet mark as she set out the 600 gram spear to 58.47m. Defending champion Suman Devi, who won South Asian Games gold in Guwahati could manage only a bronze today with a 53.67m throw.

The men's and women's 4x400m relay races were cancelled.