When Saina wanted to quit badminton 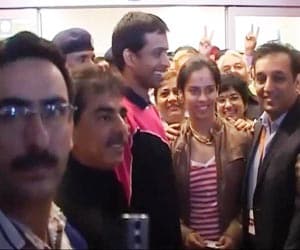 "Saina came up to me the day after she lost to Tine (Baun) in Denmark. (She was) crying (and) her eyes (were) swollen, she came to me and said 'Bhaiya it is not happening for me. We need to do something. She said if this continues I will not play," Gopichand told reporters.

India's chief badminton coach recalled that he was shocked to see her.

"I promised her that we will win an Olympic medal. The same day I made calls to my dad, mom and my wife and said I want to fulfil my promise (to Saina)," the former All England champion said.

Gopi spoke about the sacrifices he and Saina made over the months. There were no movies, no late night television and parties for the coach as he wanted to be available at his academy at 4.30 a.m. every day.

"I am really fortunate that though I didn't win a medal in my playing time, I won a medal in my life time," he said adding that all his goals in life have now been achieved.

Gopi called Saina one of the greatest sportspersons.

"She has done better than all of us. She is phenomenal. The greatest thing is she is young. There are many years to go," he said.

He told the 22-year-old Saina to plan for 2020, by which time she would have competed in another eight All England, about six world championships, two Olympics, two Commonwealth two and as many Asian Games.

Saina won the medal after Wang Xin of China pulled out of the bronze medal play-off due to a knee injury.