Wear it proud: The flag as a fashion statement

There was no mystery as to which team Varun Pemmaraju was supporting: His American flag was tied around his neck, the Stars and Stripes floating like a cape behind him. 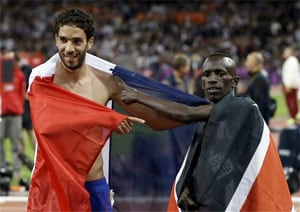 There was no mystery as to which team Varun Pemmaraju was supporting: His American flag was tied around his neck, the Stars and Stripes floating like a cape behind him.

"I was going for the Superman, Captain America-look," said the beaming 19-year-old computer science and chemical engineering student from San Jose, California, as he stood a stone's throw from Olympic Stadium. "I thought America was a little under-represented."

Patriotism and the Olympic games have long gone together, but gone are the days when one just waved a flag. Now flags are worn.

The fashion flags can be found at Olympic Park and around London as shift dresses and smocks, pants and shorts, hats and shoes, even dangly earrings and bracelets. There's apparently no garment - nor nail polish - that can't be fashioned into something akin to a national banner.

Although the sponsorship police at the International Olympic Committee can stop merchants from using the five Olympic rings, there's no trademark police on flags.

Besides, capitalising on a good fashion idea is not new. In recent years, "fast fashion" has transformed the retail industry, as mainstream companies seize the hottest ideas from the catwalk, copy them as quickly as possible and move them onto the shop floors. Some manufacturers have gotten so fast they can produce wearable creations from factory to store in the same season in which they were created by top designers at Chanel, Ralph Lauren or Dior.

None of these flag fashions are going to give Burberry a run for their money - they are not made to last.

Jayne Ody got her raincoat, which was covered in Union Jacks, from Primark, a British store that specializes in cheap, cheerful fashion. And it was a bargain, at 8 pounds ($13).

Her friend Ann Wanklyn was wearing two Welsh flags - emblazoned with a dragon - that had been sewn together into a simple shift dress. But Wanklyn is not about to claim she's a fashion princess - Olympic Park is a sporty crowd.

"You won't see anyone here walking around in heels, I can tell you that," Wanklyn said.

Turns out those flags can be handy in this unpredictable British weather. Someone seems to have a concession of selling a plastic variety that doubles as a raincoat. The British flag, as one might expect, seems to be very popular, but so is the tricolor of France and the triangle-cornered ones of the Czech Republic.

And then there are the Dutch. Who needs a flag when your nation is basically a colour - blinding orange? There are orange jackets, overalls, shoes but you almost never see the Dutch flag itself.

The orange also comes in the form of tiny hats - a bargain at 1 pound ($1.56) each - as worn by three Wagenaar sisters. Sabine Wagenaar, 24, simply laughed when asked about her fashion choice.

Then there are those just trying to buck their athletes up. Hugh Barton, 11, from Brisbane, Australia, was sad that the Aussie swimmers weren't at their best this year. He wore a flag around his neck and held one in his hand for maximum patriotism.

Before the games, American athletes were briefed on how to hold the flag should they be lucky enough to win. The U.S. Olympic Committee pointed out a picture of swimmer Missy Franklin displaying the flag properly after winning gold - right hand on stars, left hand on stripes.

Wearing the flag, well, that's for spectators. Still, people like Pemmaraju are wearing it well.

"It's a way of celebrating all the things that your country is about," the University of California student said. "I know America is not a perfect country ... but it's got me where I am."