Olympic Silver medallist Vijay Kumar and bronze medallist Yogeshwar Dutt have been recommended for the Rajiv Gandhi Khel Ratna award while Yuvraj Singh will be among 25 to get the Arjuna Award. 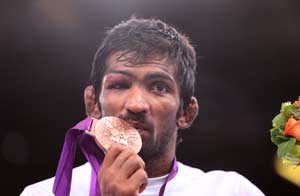 Olympic Silver medallist Vijay Kumar and bronze medallist Yogeshwar Dutt have been recommended for the Rajiv Gandhi Khel Ratna award while Yuvraj Singh will be among 25 to get the Arjuna Award.

The names of pistol shooter Vijay Kumar, who won a silver in the 25m rapid fire event at the London Olympics and Yogeshwar, who bagged a bronze in 60kg free style event, were selected by the Arjuna Awards and Khel Ratna Committee, headed by Athens Olympics silver medallist shooter Rajyavardhan Singh Rathore.

Cricketer Yuvraj Singh, who is preparing to stage a comeback after recovering from a rare germ cell cancer, is among the 25 sportsperson, who have been nominated for the Arjuna Award.

The final list of award winners is expected to be announced in a couple of days by the Sports Ministry.

Generally, the names submitted by the Committees are accepted by the Ministry.

It is noteworthy that all the other medallists at the London Games - Mary Kom, Gagan Narang, Sushil Kumar and Saina Nehwal - have already received the prestigious award. While Mary Kom and Sushil Kumar got it jointly along with Vijender Singh in 2008-09, Saina Nehwal got it in 2009-10 and Gagan Narang was the last recipient.

The awards were instituted in 1991-92 and the first of the awards went to Chess superstar Viswanathan Anand. While Vijay Kumar will be the sixth shooter to receive the award after Abhinav Bindra (2001-02), Anjali Bhagwat (2002-03), Rajyavardhan Rathore (2004-05), Manavjit Sandhu (2006-07) and Gagan Narang (2010-11), Yogeshwar Dutt will join Sushil Kumar as the second wrestler to get it once the award is conferred.

Kumar was promoted to the rank of Subedar Major by the government in a ceremony on Thursday and Army Chief Gen Bikram Singh had promised him all help to elevate him to the rank of an officer.

Yogeshwar's bronze medal was also a stupendous feat considering the fact that he bounced back brilliantly after losing his 60kg quarterfinal bout and worked his way to the bronze through the repechage stage. He showed tremendous stamina, skill and strength to overcome all odds.

Comments
Topics mentioned in this article
Vijay Kumar Rahul Dravid Gagan Narang Anil Kumble Gary Kirsten Yuvraj Singh Olympics 2012 India Yogeshwar Dutt Other Sports
Get the latest updates on India vs South Africa and check out  Schedule, Results and Live Score. Like us on Facebook or follow us on Twitter for more sports updates. You can also download the NDTV Cricket app for Android or iOS.