Gagan Narang's nightmare is over, Yogeshwar Dutt too doesn't need to live with the feeling of being an Olympic failure, while for Saina Nehwal the ghosts of Beijing have finally been exorcised. 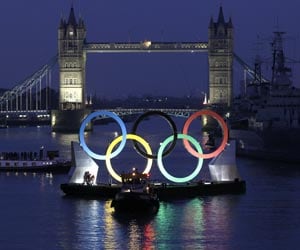 Gagan Narang's nightmare is over, Yogeshwar Dutt too doesn't need to live with the feeling of being an Olympic failure, while for Saina Nehwal the ghosts of Beijing have finally been exorcised.

For these Indian athletes -- along with three others --have finally achieved their dream of finishing on the podium at the world's biggest sporting event after years of struggle.

Returning after winning a bronze medal at the London Olympics after two failed attempts at Athens and Beijing, Yogeshwar can't thank God enough for rewarding his hard work.

"There was pressure on me because this was my third Olympics and I am more grateful to God that he finally blessed me with a medal at London," he said during a felicitation program organised by electronics major Samsung.

The silver medallists were awarded Rs 15 lakh and bronze winners got 10 lakh each.

Such was his zeal to win an Olympic medal that Yogeshwar fought like a gladiator, fighting five bouts one after the other, that left him with a badly swollen eye.

"It doesn't matter if I hurt my eyes or legs or any other part of my body. These will heal but I would not have been able to live with this feeling that I could not win a Olympic medal in my life," said the 29-year-old wrestler, who outwitted North Korea's Jong Myong Ri to win the bronze in 60kg freestyle.

"Now I want to change the colour of the medal in the next Olympics in Rio," he added.

For rifle shooter Narang, it was a nightmare to live with the feeling that he could not win an Olympic medal, despite winning enough in other international competitions.

"It was a nightmare and a challenging situation, every time someone would ask me about not winning an Olympic medal, there was pressure. But I am glad I could achieve what I wanted," said the 29-year-old, who clinched the bronze medal in the men's 10 m air rifle event.

"In sports after the physical barrier, it is about mental challenges. It is about not giving up and I am glad that I could hang in there and deliver.

"I have a new destination now. I need to continue the good work and perform at the Commonwealth and Asian Games and make the people of this nation listen to the national anthem at Rio Games," Narang added.

The youngest Indian to win a medal at the London Games, Saina too was relieved after realising her dream of finishing on the podium after missing out on her Olympic debut at Beijing four years ago.

"2012 was a great year for me, I won three titles and then the Olympic bronze. I never expected that I will be the first badminton player to win an Olympic medal for India," said Saina, who clinched the medal after her third-place play-off opponent Xin Wang retired midway due to an injury.

"I still remember my last Olympics when I lost after leading 11-3. I could not sleep many nights after that. Olympic was my dream and I am happy that I could achieve that dream.

"Last time, I was ranked 18th, this time there was more pressure because everybody was focusing on my game. I am glad I could win over Xin after losing to world number one in semifinal. In the 7-8 years that I would play, it will be Saina against China and I hope to stay fit and grow stronger and be more consistent," she added.

Besides Saina, the only other female athlete to win a medal at London, boxer M C Mary Kom too had her period of struggles and said she is happy she could prove a point that even women can bring laurels in boxing.

"People used to say that boxing is for men and not for women and I thought I will show them some day. I promised myself and I proved myself. My question was if men can box why can't women, that was my first challenge," said Mary Kom, who won a flyweight (51kg) bronze medal after losing to Great Britain's Nicola Adams in the semifinals.

Comments
Topics mentioned in this article
Saina Nehwal Olympics 2012 India Sushil Kumar Yogeshwar Dutt
Get the latest updates on IPL Auction 2023 and check out  IPL 2023 and Live Cricket Score. Like us on Facebook or follow us on Twitter for more sports updates. You can also download the NDTV Cricket app for Android or iOS.