London 2012 Badminton: I was thinking too hard, says Saina Nehwal after her semi-final loss

India's ace shuttler Saina Nehwal was beaten in straight games by world number one Yihan Wang in the women's singles semifinals at the London Olympics on Friday but remained in the medal hunt as she will be competing in the bronze medal play-off on Saturday. 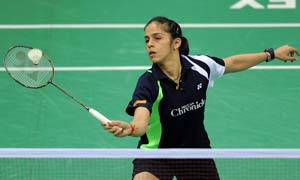 Outclassed by a clearly superior rival, Saina Nehwal on Friday lost to the top-seeded Yihan Wang of China in the women's singles semi-final of the Olympic Games here, acknowledging later that the Chinese was "too fast" for her.

World No 5 Saina, the first Indian to reach the Olympic semi-final in the shuttle game, was beaten 13-21 13-21 by the world's top women's badminton player in a match that lasted 42 minutes before a packed Wembly Arena where Indian supporters outshouted the Chinese but that too did not help.

Saina can still hope to win an Olympic bronze in a play-off with yet another Chinese player Li Xuerui, who defeated compatriot Xin Wang in a closely fought second semi-final 22-20, 21-18, played immediately after Saina-Yihan clash. The Indian will meet the World No 3 Chinese in the play-off on Friday.

Clearly off colour, the Hyderabadi girl was never in the match except for brief moments in the second set. She was unable to draw her rival into rallies and could not hold her service for long.

The taller Wang moved swiftly on the court, never allowing Saina to engage in rallies which is her strength. The longest rally of the match lasted 38 seconds and the average rally just 10 seconds.

Acknowledging the superiority of Wang, the disappointed Indian said later that she was too fast for her while she herself was not moving so well on the court.

"Wang was simply too fast for me. I was not moving well on the court and she exploited that. I made some errors in crucial stages which did not help me," she said.

"I tried hard in some areas but she just did not allow me to settle down and engage in rallies. She was finishing off quickly and was coming upto the net to attack. I could not counter that kind of a game," Saina explained.

Up against the top seeded Chinese, Saina committed too many unforced errors to see her dream of winning an Olympic gold medal come crashing.

There was very little margin for error for Saina as Yihan was sharper, more accurate and also used her powerful smashes to outwit the Indian here.

The 22-year-old committed too many unforced errors to lag 6-11 at the interval in the first game. Although Saina tried to come back with the help of some brilliant net play, the Chinese employed some immaculate placements and powerful smashes to lead 1-0.

In the second game, Saina tried to match her superior rival and did trouble her to enjoy a one-point lead at the break. But the tall Chinese used her height to advantage and was also very quick on the court.

She mixed her repertoire of strokes to include the Indian to commit errors and moved ahead.

Yihan anticipated the shots and was better prepared and, with Saina hitting wide and long, the Chinese registered three straight points after moving into the match point to cement her place in the finals.

This was Yihan's sixth victory over Saina in as many encounters.