With a world record and four Olympic gold medals in his collection, many would say Usain Bolt is already the greatest sprinter the world has ever seen. 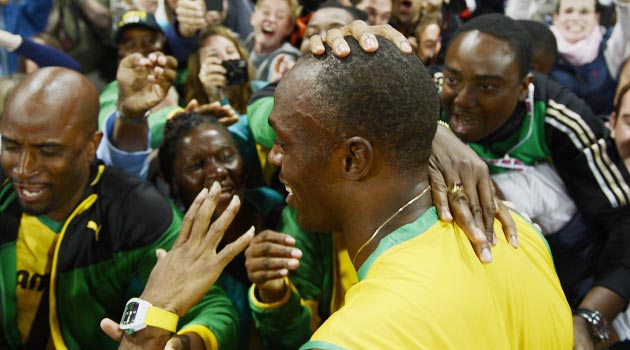 London: With a world record and four Olympic gold medals in his collection, many would say Usain Bolt is already the greatest sprinter the world has ever seen.

But after leaving his rivals for dust in a stunning 100m in London on Sunday, the Jamaican insisted he needs to win the Olympic 200 metres title for a second time to achieve that label.

Unbelievably for someone who has already achieved so much, Bolt came to London with doubts surrounding whether he could achieve what he did in Beijing four years ago.

A modest season by his standards, fitness concerns, an early morning car crash and losing both sprints to training partner Yohan Blake at the Jamaican trials all left some observers wondering if he could retain his titles.

But clearly the special atmosphere surrounding an Olympics sparks something in the 25-year-old from Trelawny.

After first hiding in the Jamaican training camp in England, the Bolt of old returned in a witty performance in a packed press conference on the eve of the Games.

From playing to the crowd prior to the 100m final and then obliterating the fastest field in history with a devastating finish, Bolt showed that the big stage is where he feels most at home.

"I've said it over the years that when it comes to the championships, this is what I do," said Bolt.

"It's all about business for me. I'm really focused and I'm ready so I just came out here and I showed the world that I'm the best.

"It means one step closer to being a legend so I'm happy with myself."

That modesty is what makes him so popular with both spectators and rivals - not for him the brashness of the 2000 Olympic champion and former world record holder Maurice Greene, who had a tattoo inscribed with 'GOAT' (the Greatest Of All Time).

In fact, Bolt believes he is a better runner over the longer distance -- and intends to show it when the heats take place on Tuesday.

Athletics will be hugely thankful the man who has done more to give the sport a positive global recognition that it lacked as years of high-profile doping scandals sapped its credibility.

While former champions or world record holders either fell by the wayside - think of Tim Montgomery whose downward spiral ended with a spell in prison - Bolt has provided both spellbinding performances and great entertainment.

Bolt has been criticised by some for performing to the crowd before a race but unlike them he has realised that athletics is an entertainment business and the crowd need to be brought into it.

"This is what I do. I've said it," he said. "A lot of people come out to see what I'm going to do today, tomorrow and it's fun for them.

"I enjoy showing them and giving them the joy I get out of doing this because they give me the energy to do it so I'm always hungry."

The athletics authorities, the meet promoters and the fans will be hoping he stays hungry for a long time to come.