Jamaican sprint king Usain Bolt dominated Twitter during the Olympics, the social networking site has revealed, with his gold in the 200 metres inspiring a staggering 80,000 tweets per minute. 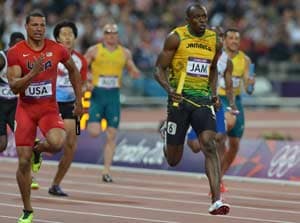 Jamaican sprint king Usain Bolt dominated Twitter during the Olympics, the social networking site has revealed, with his gold in the 200 metres inspiring a staggering 80,000 tweets per minute.

He followed it up with more than 74,000 messages posted every minute for his 100-metre triumph, the second most-tweeted event of London 2012, the website said after the Games closed late Sunday.

The figures justified the organisers' boast that London was the first real "social media Games".

"We saw more than 150 million Tweets about the Olympics over the past 16 days," Twitter said in a blog post.

"In addition to inspiring the biggest conversation spike with his 200m win, Usain Bolt also took home the record for being the most discussed athlete of the Games," it added.

"But he had company -- nine other Olympians garnered more than 1 million Tweets each."

Bryant does not use Twitter himself, and fans posted messages about him using the hashtag #GetKobeOnTwitter.

Traffic also soared in the ceremonies before and after the Games -- with the Spice Girls' performance in London's closing extravaganza inspiring more than 116,000 tweets a minute alone.

The website had already disclosed that the opening ceremony sparked 9.66 million tweets -- more than the whole of the 2008 Beijing Olympics.

Football was the most popular sport of the Games across Twitter's 33 supported languages, driving well over five million tweets.

"Other popular sports were the swimming events, the track & field (athletics) events, gymnastics, and volleyball," the website said.

Jamaica's world record-smashing win in the men's 4x100 relay -- the event which gave Bolt his third gold of the Games -- was hailed by more than 52,000 tweets each minute.

Murray's gold in the men's tennis singles outstripped this slightly with some 57,000 posts a minute, while the United States' victory over Spain in the men's basketball final sparked more than 41,000 a minute.

Comments
Topics mentioned in this article
Eoin Morgan Danny Gabbidon Carlton Cole Athletics Olympics 2012
Get the latest updates on IPL Auction 2023 and check out  IPL 2023 and Live Cricket Score. Like us on Facebook or follow us on Twitter for more sports updates. You can also download the NDTV Cricket app for Android or iOS.