The United States and Brazil will eye Olympic volleyball gold in London, but the tournament has been stripped of some its magic by the historic failure of Cuba to qualify. 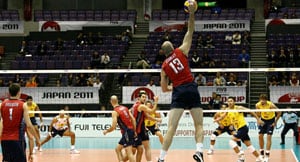 The United States and Brazil will eye Olympic volleyball gold in London, but the tournament has been stripped of some its magic by the historic failure of Cuba to qualify.

For the first time since 1972, there will be no Cuban team at the Games.

But the seeds of decline have been in evidence for some time -- that triple gold run slumped to a bronze in 2004 and no medal place at all in Beijing four years ago.

Having failed to make it out of their regional qualifying event, the Cubans were forced into a do-or-die battle in the last round in Japan where they also missed out on the final three.

They were humbled by unheralded Thailand in their last game, a low point for a squad who reportedly needed a financial bailout to meet their travelling expenses just to get them to Tokyo in the first place.

In the qualifiers, Cuba, who were also world champions twice in the 1990s, only recorded wins against little Peru and Taiwan.

"Not only was the motivation missing as well as team spirit, there was also no responsibility being taken by a team famed for its tradition of fighting," said newspaper Granma.

"For the first time in the history of volleyball on this island, neither team has qualified for the Olympics and we will also have no team sport representation."

The state newspaper summed up the women's failure as "inconceivable".

The team, known as "Morenas del Caribe", are second only to Russia in women's volleyball honours at the Olympics -- the Russians have won four gold medals and three silver.

Brazil are the defending Olympic women's champions, having succeeded China in Beijing.

Their biggest rivals are expected to include the United States, the silver-medallists in 2008, who will be looking to Stacy Sykora for inside knowledge as she has played professional club volleyball in Brazil.

However, she has been fighting for a place in the team after suffering a brain injury when her team bus crashed on the outskirts of Sao Paulo last year.

Libero Sykora is keen to play in a fourth Olympics.

"I'm just not there yet. I'm not playing like Stacy Sykora can play," she told Sports Illustrated.

Brazil secured their spot in London by coming through qualifying in May and will be looking to star players Fernanda Garay and Sheilla Castro to lead the way to another gold.

"We played a good qualification tournament, but we have a lot to improve, principally serve and counter-attack," said Brazil coach Jose Roberto Guimaraes.

"We cannot think that we are fine because the level outside is higher than here. We have to get better in the physical part, the players need to get stronger."

In the men's tournament, the United States are the defending champions, having dethroned Brazil, who claimed gold in Athens.

Comments
Topics mentioned in this article
Brazil Volleyball Olympics 2012
Get the latest updates on India vs South Africa and check out  Schedule, Results and Live Score. Like us on Facebook or follow us on Twitter for more sports updates. You can also download the NDTV Cricket app for Android or iOS.