The Americans need Jordyn Wieber to regain her swagger in a hurry if they're going to hold off Russia for Olympic gold.The two gymnastic powers have been trading places in team competition for two years and will face off again on the biggest stage for an Olympic title on Tuesday night. 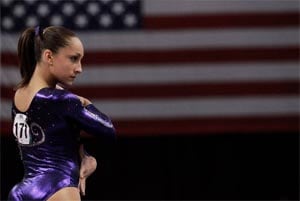 The Americans need Jordyn Wieber to regain her swagger in a hurry if they're going to hold off Russia for Olympic gold.

The two gymnastic powers have been trading places in team competition for two years and will face off again on the biggest stage for an Olympic title on Tuesday night.

The Russians won the world championship in 2010, then finished second to the U.S. last year.

Defending world champ Wieber failed to qualify for the all-around competition at the London Olympics, but the U.S. women will be depending on her for a comeback if they're going to win their first team gold medal since the "Magnificent Seven" of the 1996 Atlanta Olympics.
"We're going to have to cheer her up and hype her up," teammate Gabby Douglas said.

After failing to qualify for the all-around, the 17-year-old Wieber sobbed and was consoled by teammates. She didn't speak to reporters afterward.

Later, she posted on Twitter: "I am so proud of our team today and I can't wait for team finals!!"

O2 Arena has rocked so far, and with host nation Britain in the mix after missing the team final at the 2008 Beijing Games, the scene should be even more festive - especially after the British captured their first Olympic team gymnastics medal in more than 80 years with a bronze in Monday's men's competition.

Now, it's Wieber and Douglas' turn to chase that elusive American team gold and try to accomplish something the Nastia Liukin-Shawn Johnson show of 2008 couldn't in Beijing, where China captured gold on its home turf.

Former world champion Aliya Mustafina and the focused Russians were the only squad to come close to challenging the U.S. team after Sunday's qualifying.

And they're so determined to beat the Americans, Russia's athletes blew through the mixed zone without even speaking to their own reporters. The word is they won't be heard from until the job is done.

In gymnastics, the U.S. women's team will look to reach the top spot on the podium a day after the American men's team finished a disappointed fifth. The Romanians also are expected to challenge for a medal.

"I think we've definitely set the bar higher," Douglas said. "It's just an amazing feeling to know that Team USA is definitely strong. Even myself, we've come a long way."

While the U.S. dominated team qualifying on Sunday with a score of 181.863, the Russians are determined to keep closing the gap with the world watching. Mustafina didn't compete in the 2011 worlds because she injured her left knee at the European Championships that April - and now she's back but still trying to regain top form. Her vault, for example, is a less difficult one than what she performed when she got hurt.

The U.S. gymnasts consider the gold theirs for the taking after all the strides their program has made in recent years.

"I guarantee one thing: The truth is going to come out on the Olympic Games," said the renowned coach Bela Karolyi. "The truth is that we are solidly in the first place on the team, no question about that."

The Americans aren't ready to celebrate anything yet. Everything changed in a matter of minutes Monday night, when Japan jumped from fourth to a silver medal after a protest and bumped the Ukraine right off the podium.

"The Olympics are always a dog fight," USA Gymnastics president Steve Penny said. "There is something that always pops up and changes the perceived outcome. Something happens and it changes it."