Three people were charged with fraud on Wednesday as part of an investigation into allegations that Premier League club Tottenham spied on Olympic officials during its failed bid to take over London's Olympic Stadium. 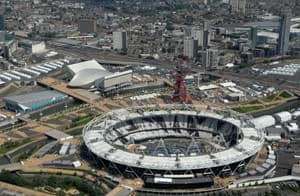 Three people were charged with fraud on Wednesday as part of an investigation into allegations that Premier League club Tottenham spied on Olympic officials during its failed bid to take over London's Olympic Stadium.

Three men were charged with illegally obtaining information on the stadium process following accusations made by West Ham and the Olympic Park Legacy Company, police said.

OPLC chair Margaret Ford alleged last year that Tottenham ordered surveillance by private investigators on all 14 members of her board during the bidding to decide who will move into the $745 million stadium after the 2012 Games. The north London club denied any wrongdoing.

The men arrested were identified as Richard Forrest, Lee Stewart and Howard Hill. They were ordered to appear in court on Nov. 28.

In a separate High Court case last year, evidence emerged that a company - which a judge said was hired by Tottenham - had copies of a West Ham executive's telephone records that had been "unlawfully obtained by subterfuge."

Tottenham originally lost out to West Ham in the stadium bidding, but that deal collapsed amid legal wrangling. A new bid process was launched, and West Ham remains the favorite to become the stadium tenant. A decision is expected by Dec. 5.

The stadium was originally expected to reopen in 2014, but officials announced last week that it won't be until 2015 at the earliest and possibly not until the summer of 2016.

UK Athletics chairman Ed Warner called the delay a "farce." The federation had planned to hold track and field events in the stadium starting in 2014.

"All of the legacy use was scheduled to start in two years' time and now it might be four years' time which strikes me as ludicrous and to be a paralysis of decision-making," Warner said.

The stadium will host the world track and field championships in 2017.

Comments
Topics mentioned in this article
Football Olympics 2012 Tottenham Hotspur
Get the latest Cricket news, check out the India cricket schedule, Cricket live score . Like us on Facebook or follow us on Twitter for more sports updates. You can also download the NDTV Cricket app for Android or iOS.